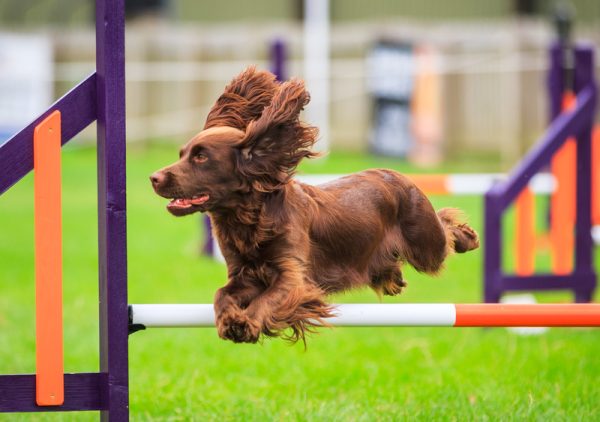 If ever there was a “team building” activity for owners and their dogs, it’s agility. It builds confidence and trust, promotes the use of positive reinforcement to get the dog to do what the handler wants,  provides lots of exercise for the dog who needs to burn excess energy,  and helps solve many behavioral problems caused by boredom, anxiety, and depression, making both owner and dog happier.

It is not, however, an endeavor for a poorly built dog, and specifically, not one with a shallow chest. Few breed standards don’t call for a depth of chest in an adult dog to be less than one that reaches the elbow. We found examples from all seven AKC groups of breeds calling for the chest/brisket to reach the point of elbows:

From the Bouvier des Flandres standard: “The chest is broad, with the brisket extending to the elbow in depth.”

From the Boerboel standard: “Depth of the chest reaches down to the point of the elbow, which is approximately half the total height at the withers.”

From the Airedale Terrier’s standard: “The depth of the chest should be approximately on a level with the elbows;”

The Miniature Pinscher’s standard: “Depth of brisket, the base line of which is level with points of the elbows.”

From the Chesapeake Bay Retriever’s standard: “Depth of body should extend at least to the elbow.”

Mind you, we did say, “an adult dog,” which is why a fancier who is physically examining a pup will reach between the front legs and say, “His chest hasn’t dropped yet” if that is the case. Some standards also call for more depth, and wording can vary, as well. To wit: the Ibizan Hound standard reads, “The elbow is positioned in front of the deepest part of the chest. It is well held in but not so much as to restrict movement.

A shallow chest limits heart and lung efficiency which impacts endurance,  but when the chest is above the elbow, it impacts the way the upper arm ties onto the chest and diminishes the stability of the dog’s front assembly.  Put another way, correct chest (or brisket) depth helps maintain elbow stability. Without stability, an agility dog is more likely to hit her ribs whens she lands from jumps, and once source writes that a dog can actually jam them. Restricted movement is not a good thing in an active dog.

A dog’s rear is important, of course, since an agility dog pushes off his rear, but that’s a topic for another post. It is the front of a dog that endures the most wear and tear since a full 60% of a dog’s weight is carried in their front.

Does this mean a shallow chested dog shouldn’t do agility?

You should always defer to the advice of your veterinarian, but one way to look at the answer is to “humanize” the question: According to the UK Scoliosis Clinic, gymnasts are up to twelve times more inclined to develop scoliosis than non-gymnasts. Is it a good idea for a human child who already has scoliosis to compete in gymnastics?

We have to think that the occasional jump and weave won’t harm a dog, but for the person who wants to compete in agility, we advise contacting a preservation breeder and informing them of the desire for a structurally sound dog built to enjoy the sport.