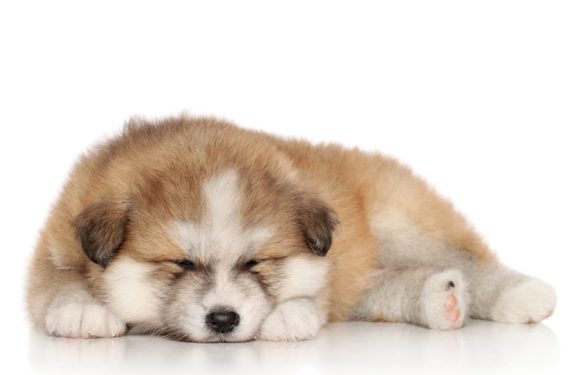 When half of a dog’s face is one color, and the other half is some other color (usually white), the term used among English speaking dog fanciers is “split face.” Split faces are not uncommon in Border Collies, Australian Shepherds, and the Smooth Fox Terrier, among others.

In Japan, the split face is known as hachiware (“hachi” meaning head, and “ware” meaning “dividing”).  The term has been defined as a white blaze extending up the forehead, past the ears, and essentially dividing the dog’s face into two colored parts (a drawing of this can be seen at the bottom of this page, it is second from the right). According to Nippo, the Association for the Preservation of the Japanese Dog, this is an eliminating fault in the Japanese Akitainu,  the largest of the native dog breeds of Japan. There are those who feel that hachiware renders a dog as lacking the true beauty of the Japanese Akita.

Hachiware is also a disqualification in the Japanese Akitainu‘s AKC breed standard when it appears in reds and brindles: “For reds and brindles – Faults – White blaze that extends from the muzzle to the back of the head (hachiware). Excessive ticking on legs or muzzle. Serious Fault – Wide white collar marking extending completely around the neck. Disqualification – Pinto markings. Hachiware blaze that connects to a complete white collar.

Hachiware markings can be related to roppaku, a dog with four white socks a white blaze on the face, and a white tail tip. This shouldn’t be confused with urajiro (a white underside). In roppaku, the white can mask dark or black parts of the dog’s coat, nor does it have to be symmetrical.

Hachiware isn’t limited to dogs. It also applies to koi, a flashy carp often seen in fish ponds. There, too, it refers to a pattern that divides the head, but in that species, it is not regarded as a negative attribute. Good hachiware in koi runs from the mouth to the shoulder in an Inazuma pattern that makes the koi’s pattern appear to be more dynamic. As an aside, it has also been called menware, “men” meaning “face.” In koi, both ‘head’ and ‘face’ refer to the same thing and are used interchangeably.

But wait, there’s more! Hachiware is also the name of a cat in the graphic novel series by Nagano called Chiikawa. Chiikawa is some sort of small, cute creature, and Hachiware is his best friend.