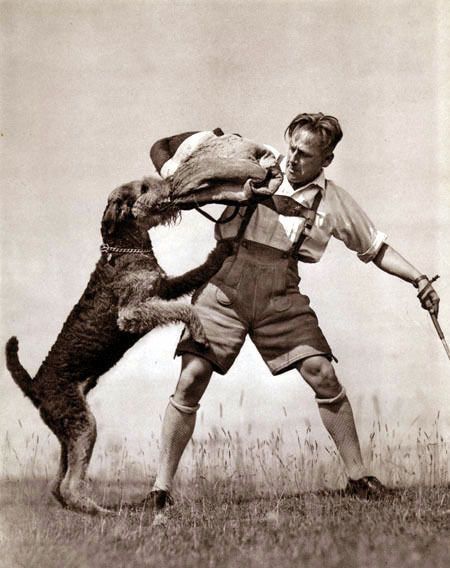 These days, we tend not to think of the marvelous Airedale Terrier as a police dog, but the breed’s history most certainly includes a chapter of such work.

British Colonel Edwin Hautenville Richardson extensively trained Airedales for the War Dog Program (1900-1918) and during World War I, Airedales were used as sentries, to locate wounded soldiers, as messenger dogs, and to signal for help. After the war was over, Airedales were adopted into the British police forces, and indeed, in 1910, Glasgow became the one of the first police forces in Britain to recruit canine officers. Rather than using German Shepherds, it was Airedale terriers that were trained in Carnoustie. To learn why, we circle back to Lt Col Richardson who after the war, had contacted every chief constable in the UK with the suggestion that his Airedales would be useful in law enforcement.

As it happened, Richardson’s letter came at a fortuitous time in Glasgow. The city had been shocked by a fatal shooting of an armed robber in the home of wealthy Glasgow family in 1908. Crime had been on the increase, and citizens wanted something done.

Two years later, Richardson’s letter arrived at police headquarters in Glasgow’s St Andrew’s Square. Impressed by the work of police protection dogs in Belgium, and needing protection during dangerous nighttime patrols, the local constabulary was ripe to try something new.

The purchase of four dogs from Lt Col Richardson was authorized at the cost of £21 – which, if our calculations are right, is roughly equal to $568.57 today in US dollars. The dogs worked out for about three years, and then the program was phased out for reasons we’ve not been able to find, but you’ll find the video below of interest. Click on the photo to start the video:

In 1910 Glasgow became the one of the first police forces in Britain to recruit canine officers – and rather than German Shepherds, they were Airedale terriers trained in Carnoustie. In the early 1900s crime in parts of Glasgow, housebreaking in particular, was getting out of hand.

Another source we came across suggested that the very first police dogs in the UK, while also Airedale Terriers, were actually used by the North Eastern Railway Police. Trained at Hull where kennels had been built, each dog was issued a coat to wear in bad weather, and were taken on patrol only at night. The Airedales were trained to protect the police uniform, but attack anyone not wearing a uniform. Their training was almost too good because the dogs would growl at their own handlers if they weren’t in uniform. Again, click on the photo to start the video

After the Great War,  the dog section was reviewed and by 1923, Hull trainers decided to use German Shepherd Dogs.

Image from an German portfolio book – circa 1930s or 40s – depicting an Airedale Terrier doing Schutzhund-like bite work on a paddle sleeve. Credit to the marvelous Facebook page, History of dogs in photos, where we first saw it.

2 thoughts on “Airedales on the Beat”