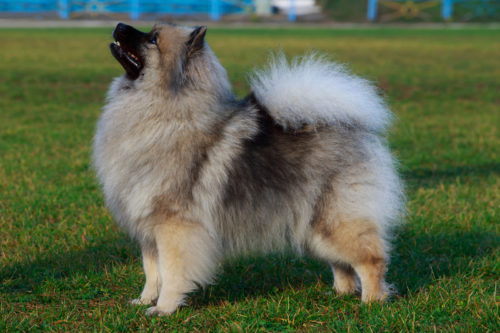 We’d guess that most people “in” dogs have a rough idea of what “trousers” refer to in the dog world, and if you do, but you don’t own a Keeshond, pat yourself on the back. The Keeshond is the only AKC breed in which “trousers” are referred to in the breed standard, and not just once, but twice:  “His rump and hind legs, down to the hocks, are also thickly coated, forming the characteristic “trousers.” And later: “The hair on the legs should be smooth and short, except for feathering on the front legs and “trousers” on the hind legs.”

As for the source of the word, it’s obvious. The long hair on the upper half of the dog’s rear legs makes it look as though he or she has on half trousers (what certain generations would say was a length somewhere between pedal pushers and toreador pants), an appearance enhanced by the feathering and typically lighter color that appears on that area.

In a show dog, special attention is usually paid to the trousers with a comb or brush because the dog sits on them. Some groomers work from the hocks towards the tail, or, using a pin brush, they will fluff the ruff up in a flare, and spread the trousers to look like “pantaloons” or Shakespearian breeches.

Trousers are just one part of a breed so beautiful that its appearance risks overshadowing the breed’s mischievous sense of humor.