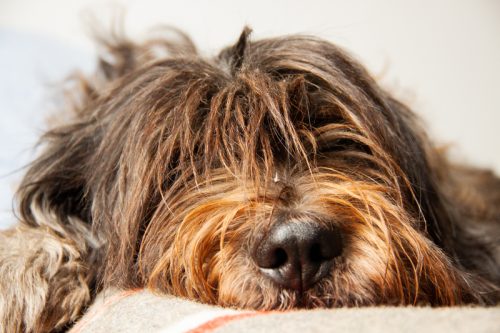 Some people eagerly check to see when the new season of a favorite TV series is set to air, but many breed enthusiasts visit the AKC’s link to the Foundation Stock Service to see what new breeds are on the list. For lack of a better description, the Foundation Stock Service® acts like a “halfway house” where purebred breeds not yet recognized by the AKC can maintain their records while developing their base in this country. Many of the breeds on the list are familiar to our readers, but one may not be as much because the Barbado da Terceira is a fairly recent addition to the FSS (it was added in January, 2021). Actually, it’s relatively recent to the Portuguese Kennel Club, as well. The club recognized the breed on a provisional basis in 2004.

This lovable mop of a Portuguese herding dog comes from Terceira, one of the nine islands that make up the Azores, some 972 miles west of Lisbon, Portugal.  As to how it got to Terceira, there are two prevailing theories; Some believe that because there are morphological similarities between the Barbado (which means “bearded”) and several types of Griffons and other hunting dogs with wire-hair, the breed’s ancestors were hunting dogs brought by settlers from all over Europe. Others dispute this because they find that griffons and other wire haired hunting dogs are actually quite different from the Barbado.

A second hypothesis points to the similarities in appearance and work style between the Barbado and medium-sized long haired herding dogs found all over Europe, and it is this theory that has gained the most traction.

We pick up the breed’s story in 1997 when dog fanciers, Jorge Gonçales and Carla Molinari (future President of the Clube Português de Canicultura) visited Terceira and noted enough homogeneity among the dogs to prompt studies on them. Several distinguished people were involved in those studies, and in the wording of breed standard proposals. António José, a delegate of the Portuguese Kennel Club in the Azores, helped Molinari and Gonçales get the dogs recognized as a native Portuguese breed.

The first provisional standard of the Barbado da Teresira (also known as the Terceira Cattle Dog) was presented in 2005 to members of the CPC General Assembly, and in September of that same year, the Barbado was presented for the first time at a dog show in Portugal. The first Portuguese Champions in the breed earned their titles in 2008, and by 2010, some foreign kennel clubs allowed the Barbado to participate in their shows. In just one year, the Barbado was often one of the most numerous Portuguese breeds attending dog shows in Portugal. The first Barbado da Terceira National Specialty took place in 2011.

In 2020, the results of a survey taken by seventeen Barbado da Terceira breeders/owners was published. The average of their responses were collected, and then rounded to the nearest whole number.  The sampling was a decent one given that between them, they owned 70 dogs, and a census taken in 2005 found a then current population of 222.  The result of the survey is a visual “infographic” you can see here.

Carla Molinari was interview by “Ante” of Talking Dogs, and we honestly don’t know if the breed was discussed in the two hour show that is posted below, but it’s always interesting to listen to dog people “talk dogs” while you’re grooming dogs or making dinner: