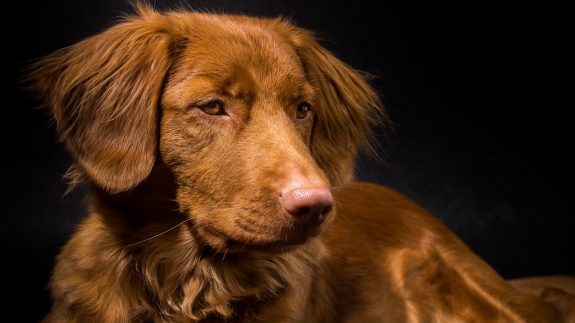 Assume that the color of the Toller in this photograph is all over its body, as in every bit of it. Is that unusual?

Because the AKC breed standard indicates that the Toller usually has at least one of the following white markings on it – the tip of the tail, its feet (not extending above the pasterns), and/or on its chest and blaze, we infer that the absence of white markings on those areas is unusual.

That said, the standard also states that a dog of otherwise high quality is not to be penalized for a lack of white. Indeed, if anything, white on the shoulders, around the ears, the back of neck, or across the dog’s flanks are disqualifications.

Do an internet search of Nova Scotia Duck Tolling Retriever images and the vast majority of dogs will have white somewhere on their body. We took advantage of the fact that what we can see of the dog in this photo shows no white so that we could write about color – and white markings – in the breed standard.

In a fabulous paper on color in the Nova Scotia Duck Tolling Retriever, the authors, JP Yousha, Danika Bannasch DVM, PhD, and Phyllis McDonald write that “‘white’ genes are actually genes which disable the body’s ability to make pigment, as areas of white actually LACK pigment (i.e. white is not a “third” form of melanin). All white genes in the Toller are actually spotting genes.”

In another part of the paper, they add, “According to what we know of the history of the Toller, the initial focus in the creation of this breed was in creating a red dog, something resembling the coloring of a fox. In order to achieve this, red from a variety of different canine sources was used. This has given Tollers mutations in three different red causing genes. Since most Tollers tend to either darken or lighten toward a similar tone of red as adults, no matter which color they looked like as pups, Toller breeders generally don’t distinguish between clear red or sable red when defining the colors of their pups on registration paperwork.”

We conclude with a bit of breed name trivia. When the Nova Scotia Duck Tolling Retriever became eligible to compete in the Sporting Group in 2003, it became the breed with the longest name in the AKC Stud Book.

Image: “Sad?” by Tom Ek is licensed under CC BY-SA 2.0 which allows us to share and copy the image, as well as remix, transform, and build upon it.

2 thoughts on “This Toller is Unusual Why?”