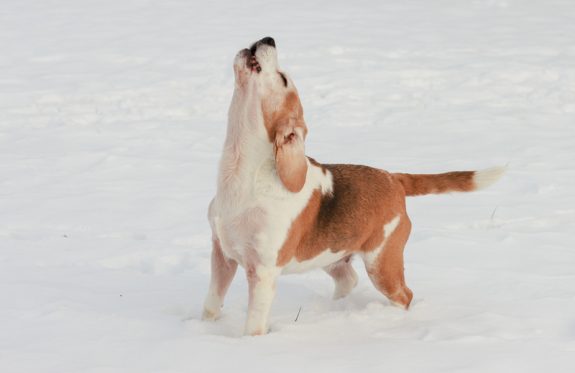 Few of us have reached adulthood without having heard (or told) the wide-mouth frog joke. To get us in the mood for our topic, watch a Brit in a three-piece suit tell it:

By now, readers have gleaned from the post title that our topic is quite the opposite of anything that is “wide-mouthed.” A “tight mouthed Beagle” is a real thing, and this Beagling term refers to a Beagle who lacks insufficient voice. It’s not a good thing for a hound to walk or run the line of the quarry during a hunt and stay quiet because “giving tongue” (also known as having an “honest” mouth) gives the hunter an idea of the dog’s progress. Has the hound picked up a scent? In what direction is the scent trail going? Has the dog spotted the prey?  All this can be discerned from the type of voice the Beagle gives, and how feverish it becomes.

Things get interesting when the topic of “tight mouthed Beagles” is discussed in Beagler forums (a Beagler is one who hunts with Beagles). We’ve come across three lines of discussion when it comes to a tight mouthed hounds: What is it, causes it, and is the trait is genetic. The nature of an open forum invites a variety of opinions, and our favorite description of “tight mouthed” came from one person who wrote:

“I guess that what you guys are calling tight mouth is not the AKC standard “Tight Mouth.” After listening to the different post we all like the same thing.  I call it a hound with a honest or a clean mouth. A mouth that pack mates can depend on. Bark like a mad man when you got it and can move it and shut up when you can’t.  When they are pounding the hair off one I like a heavy, deep, raspy, free tonguing, booming, monster, every breath, chop mouth that makes the hair stand up on the back of your neck and scares everything in the woods almost to death. You turn 20 or 25 of those kind loose and your gonna get a world beater thrill all hunt long. Talk about a race sometimes you got three races going. Just get in the middle and shoot. I also like to turn em out in a big bottom in the edge of the swamp and listen to them all night long while we fry shrimp and fish and sit by the fire. I love that music!”

We did come across a few people who disputed if being tight mouthed was even a bad thing: “…what I call tight mouth is a dog that holds its mouth until it knows it has a track it can move in a positive fashion. I personally admire a hound that has the brains to hold its mouth until it is able to do so. I have seen mouthy hounds that were tough to beat in a competition situation but are disruptive to a hunting pack. I hate cold trailing barking out of place trash mouth hounds a lot more than one with a tight mouth!

When asked as to why a Beagle would be tight-mouthed, the answers ranged from the problem being a nose issue, to youngsters being constantly overpowered by other dogs. Some shared their experience that a hound – particularly a young one – who is constantly overwhelmed by pushier dogs can result in a tight mouthed dog. Such dogs try to sneak away from the pack and run a rabbit alone and unmolested. Others believed that the trait can be inherited, and that some lines seem more prone to tight mouthed dogs than others.  One person asked for specifics: “Just wondering what bloodline is know to throw dogs with tight mouths.” There was no shortage of people who named names (which was probably not appreciated by the breeders of those lines).

Readers who are Beaglers may find this article written by Jim Lane interesting, and it starts out with an even handed sentence: “The traits of a hunting Beagle vary in opinion from person to person, kennel to kennel, hunter to hunter and in many instances judge to judge. But in most cases not for the right reasons.”

We conclude with a bit of trivia found during our research on the topic. Did you know that a pack of Foxhounds and Harriers, and a team of working Beagles is called a “Cry?”