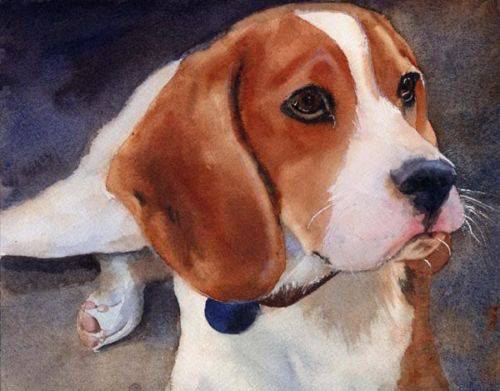 In case anyone is wondering, the Rottweiler’s AKC breed standard writes: “Serious Faults: Straw-colored, excessive, insufficient or sooty markings; rust marking other than described above; white marking any place on dog.”

This sweet puppy’s new owner clearly loved him, and hopefully, they’ve been happy together, but one wonders how much he paid for a “rare” Alaskan Rottweiler?

More recently, we came across a classified ad for a “Pocket Beagle.”  There hasn’t been such a thing since the 16th century, but unscrupulous “breeders” breeding undersized Beagles to undersized Beagles are marketing them as “rare” Pocket Beagles, and it’s resulting in unhealthy puppies. Some dog registries recognize two sizes of Beagle, and some registries recognize only one, but to our knowledge, none of them recognize a “Pocket Beagle.” Uninformed buyers can be fooled, and they’re getting duped all the time by their own ignorance and clever marketing.
Breed standards aren’t just for show dogs, they are guides that tell all of us,  pet owners and fancier alike, what to look for in a breed. The descriptions are there for a reason, and had Mr. Alaskan Rottweiler thought to do his homework about Rottweilers, he would have learned that white spotting wasn’t “okay” in the breed by AKC standards, and that serious people who know and love Rottweilers don’t recognize an “Alaskan Rottweiler.”

Red flags should go up when breed descriptions include the word “rare,”  “teacup” or “king” in reference to size, and “unusual” colors. These marketing ploys hurt all of us. Buying a “rare” version of a breed creates a market that encourages more unsound dogs to be bred. A breed is hurt when friends, relatives or neighbors of the owner of such a dog see the heartache that comes from owning an unhealthy dog, and assume that the entire breed is unsound; Heritage breeders are hurt because animal rights activists and adopt-don’t-shop zealots use unsound dogs to paint all breeders as reprehensible.

We know how difficult it can be to dissuade someone from making a disastrous decision about buying a “rare” (fill in the breed blank), especially if they have fallen in love with a puppy, or are the kind of person who thinks they know best. Consider doing them a “solid” by sharing the breed standard with them, and telling them that it’s the blueprint for the breed they’re considering. Stress that it’s not just for show dogs, but for all dogs of that breed. They won’t understand a lot of it (what person outside the Pointer fancy, for example, would understand, “The skull of medium width, approximately as wide as the length of the muzzle, resulting in an impression of length rather than width”), but it might make them think, or better yet, do more research.

3 thoughts on “The “Alaskan Rottweiler” (also known as “buyer beware”) ”