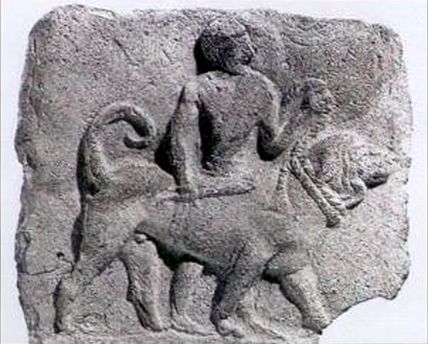 Many cynologists believe that the origins of the Mastiff’s name are in the Latin word, “mansuetus,” meaning “tame” or “domesticated.” The word eventually morphed into “mastiff” via Old French and Middle English usage, and was first recorded in Middle English in a work written before 1387.

The breed, however, is older than that. Much older.

Bas-reliefs from the Babylonian palace of Ashurbanipal now on display in the British Museum indicate that the Mastiff’s ancestors, molossus-type dogs, existed already existed in the 7th century. But wait, it’s even more impressive than that. Relics found in the mountains of Asia suggest the presence of the giant dogs in 2500 BC.

Various experts theorize that Phoenician traders introduced the Mastiff to ancient Britain, and that’s where Romans found them and took them back to Italy to be war dogs and coliseum combatants. Other experts speculate that the more likely genetic predecessor of the breed is the Alaunt, a molosser type dog introduced by the Normans.

Perhaps the Mastiff is a descendant of both the ancient Alaunt and Molosser.

We with with certainty that Aristotle mentioned the progenitor of the Mastiff in a list he wrote of the most useful breeds in 350 BC. We also know that when Hannibal crossed the Alps in 218 BC, he did it with several battalions of trained war-mastiffs. “Romantic dalliances” these mastiffs had with local dogs during their journey very likely became the foundation dogs for many other breeds, including the Saint Bernard and the Rottweiler.

It’s said that Henry VIII presented Charles V of Spain a gift of 400 Mastiffs to be used in battle, and after the Elizabethan Era, Mastiffs continued to be bred by the Dukes of Sutherland and Devonshire, as well as the Earl of Harrington and other noble families. The Legh family of Lyme Hall, Cheshire kept and bred Mastiffs for many generations.

We can thank the British for bringing the Mastiff to its modern development, and, in a way, for bringing the breed to America. It was an Englishman and pilgrim, John Goodman, who brought his Mastiff along for the voyage aboard the Mayflower.

Fast forward to WWI, and Mastiffs were used to pull munitions carts on the front lines – but because they were too expensive for the average person to feed during a time of food shortages, and because people thought it unpatriotic to keep dogs alive that ate as much in a day as a soldier, the breed started to get in trouble. Only butchers had enough meat scraps to adequately feed a Mastiff, (and for that reason, they were sometimes called “the Butcher’s Dog”), but by 1946 when mastiff-lovers gathered for the first time since 1939, the breed was close to vanishing. Indeed, when they tried to trace all the living mastiffs in the country, they found perhaps twenty dogs, but all who were too old to reproduce. A year later, it’s said that only seven dogs were still alive in England.  Only importation from Canada and the US helped establish new lines, and by 1950 the number of Mastiffs had climbed up to approximately 50.  Today, the breed is in good shape and has gone from war dog and coliseum combatant to a dog of the rich and famous, such as filmmaker, Michael Bay, who owns “Rebel” and “Bonecrusher.”