As a popular saying goes, “Iceland is green and Greenland is ice,” quite the opposite of what one would think based solely on the names of these countries. In reality, Greenland gets much colder in the winter than Iceland since over 80 percent of it is covered in ice. Indeed, Iceland’s sea surface temperatures can be about ten degrees warmer than Greenland, and even though 11 percent of the country is still covered with permanent ice cap, milder climate means intensely green Icelandic summers. Perfect dog weather. 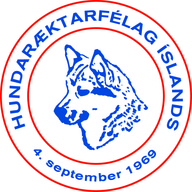 Iceland has a robust purebred dog community, and the fancy is well served by the Icelandic Kennel Club which recognizes a good many breeds (see them here). Founded in 1969, the Club organizes three International Shows (CACIB shows) and at least one national show each year. Most of the dog show “action” is presumably local dogs since Icelandic authorities don’t accept a pet pass, and imported dogs must go through a two week stay in a quarantine station. While the stated main goal of the club is to be advocate for purebred dogs, it is also to manage and protect the population of the Icelandic Sheepdog, Iceland’s only native dog breed, and the centerpiece of the club logo.

“Purebred dogs have a long history in the world, they have been practiced for millennia to maintain certain traits that have been considered desirable whether in appearance or behavior.

“If a puppy is bought from an unknown source, it is not possible to predict in what size he will grow up, what the coat will look like, whether he should be suitable for hunting, as a working dog, whether he is easy to train or more difficult to train, whether he has very strong sense of smell and could be considered as a search dog or have any characteristics that the owner wants. By getting a purebred dog, it is possible to predict much more about the characteristics of certain puppies, as as soon as the dog’s origin is known and verifiable, it will be easier to predict how it will develop.

Image: This beautiful photo of an Afghan Hound in Iceland was taken by Carolin Giese of Linaimages and appears here with her kind consent; please do not share it without the permission of the photographer
Facebook: https://www.facebook.com/FotografieCarolinGiese/
On Instagram: https://www.instagram.com/linaimages/
Website: http://www.linaimages.com/

One thought on “An Afghan in Iceland”