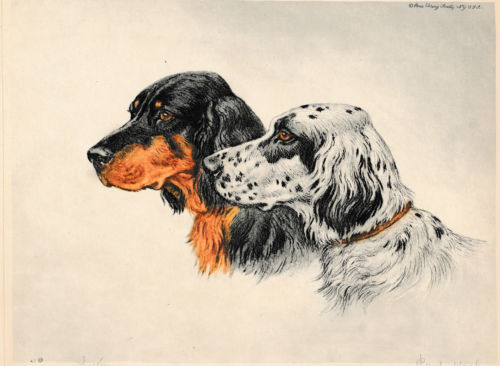 “Alistair Scott was a tall man, well built, with a face that I guessed would have once been incredibly handsome, and still drew the eye. Even mine, and I normally didn’t find bearded men all that attractive. His beard, neatly trimmed, was the same ivory white as his hair, also tidily clipped and kept short, and his eyes were a warm, lively brown.

To be honest, though, I didn’t notice most of that till later. At the moment, I was looking at the dog. His eyes were warmly brown as well, the little chestnut marks above them giving him a questioning expression, as I asked, “Is he a setter?”

“Aye. A Gordon setter. Hunting dogs, they’re meant to be, and Hector would have been as well, if his fool of a first owner hadn’t ruined him. She took him on a full day’s hunt afore he’d ever heard a gunshot. After that, if anything went bang, he’d tuck his tail and run. His owner didn’t want him, then. She sent him to the pound.”

“And so you rescued him?”

“Aye. It was never his fault, and you don’t cast a life aside like that.”

And this was our introduction to “Angus,” the Gordon Setter from Susanna Kearsley’s novel, Desperate Fortune. A self confessed writer of “gothic novels that blend historical adventure and modern-day suspense with romance and a touch of something spooky.” A wonderful read for fans of the breed!