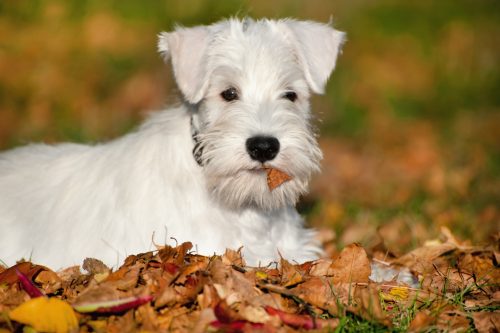 The American Kennel Club and Canadian Kennel Club recognize three colors in the Miniature Schnauzer for a conformation show ring: Salt and pepper, black and silver, and solid black.

There is a fourth color in the breed, and it is white. While the aforementioned registries do accept white Miniature Schnauzers for companion dogs and performance events, the AKC specifically disqualifies white for the show ring. That said, at least five other registries do accept the color in a conformation ring: The FCI and all its member clubs (“pure white with white undercoat”), the United Kennel Club (“white, with a white undercoat. White dogs must have black pigment. Occasional black hairs may appear in the topcoat), the UK’s Kennel Club (“white”), the Australian National Kennel Council (“white”), and the Kennel Union of Southern Africa (“white”).

In creating the breed, several experts believe that to downsize the popular Standard Schnauzer while keeping the same general appearance, temperament, markings, and colors, breeders crossed small standard Schnauzers with other breeds, most likely Affenpinschers and Poodles (the American Miniature Schnauzer Club website writes: “The Miniature is said to have come from mating with the Affenpinscher. They may have been developed entirely by chance, often the main reason for a new breed).  In doing this, however, two new colors emerged, white, and black & silver.

Perhaps the AKC and CKC took their lead from the country of origin, or believed that the white color was introduced into the breed when foreign blood was brought in. Other kennel clubs believed it was the result of a mutation.  One breed site simply says, “As time progressed, kennel clubs around the world began to slowly understand recessive genetics and realized the white Schnauzer’s legitimacy to the Miniature Schnauzer breed.”

Our sense is that the issue is somewhat controversial, and our posting about it is simply to share information, not weigh in on one side or the other.

Genetically speaking, black is dominant over the other colors. To be a black Miniature Schnauzer puppy, that youngster must have at least one black parent. A homozygous black will produce only black puppies regardless of the color of the other parent.

How about white? First, a little groundwork.

Our understanding is that each series of genes involved in creating different aspects of color is represented by a letter of the alphabet. Each series is called a locus, and each gene within a series is called an allele. Every dog carries two alleles at each locus.  The “C Series” is one of the two factors involved in producing the white Miniature Schnauzer. The “E-Series” is the second, and it lays the basis for forming the white Miniature Schnauzer.

“E”  is the dominant allele and it is carried by all salt and pepper, black and silver, and black Miniature Schnauzers. If a “colored” Mini is carrying the white factors, she is Ee at that locus. If she is bred with another Ee, they will produce white pups. The e is recessive. The double ee recessive restricts the dark pigment to eyes, nose, and paw pads. The color that is left when the dark pigment is restricted to those areas is determined by the C series which has no impact on black or dark pigmentation.