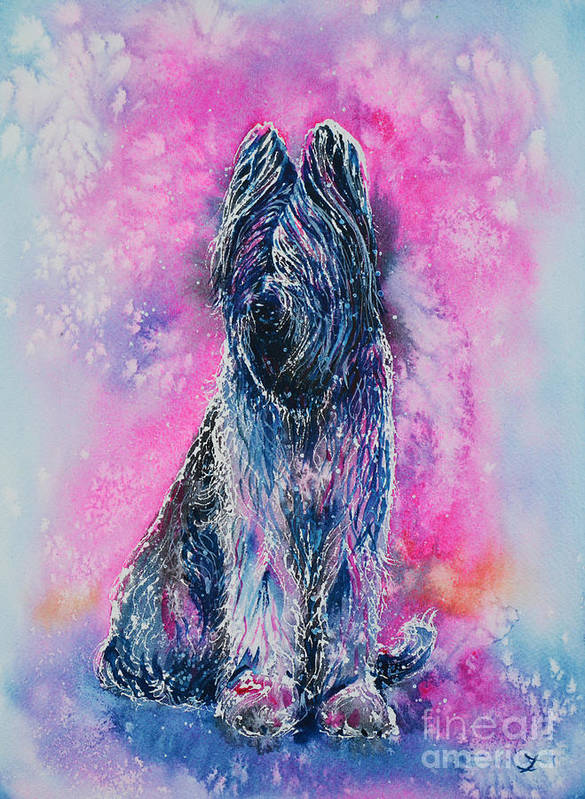 At the first showings of Star Wars, many audiences instinctively booed when Darth Vader appeared on screen. The bad guy’s persona oozed off the screen to the extent that movie goers had a visceral reaction to him, and over time, the character’s name became synonymous with evil.

The French had their own version of the archetypal villain, a two hundred year old “black hat” whose name was Robert Macaire. The fictional character was a pivotal part of the play, “Murder in the Wood,” which was better known by another name, The Dog of Montargis (it was also presented as The Forest of Bondy).

The Dog of Montargis was a 19th-century melodrama that premiered on June, 1814 at the Théâtre de la Gaîté in Paris. It had an 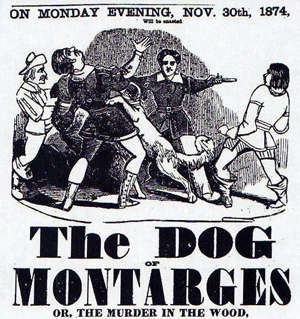 uninterrupted twenty year run in that theatre’s repertoire, but throughout the 19th century, versions were performed at many playhouses in Europe and in the United States.

Briard owners may already be familiar with the 14th century legend on which the play was based, a story preserved in a letter from Julius Caesar Scaliger: A knight and court favorite of King Charles V, Aubry de Montdidier, is murdered in 1371 by his rival, Robert Macaire, in a forest near Bondy. Aubry’s dog, the only creature that actually witnessed the murder, succeeds in bringing suspicion on Macaire. The king decides it would be God’s will to allow the dog and the accused to fight in a trial-by-combat. Descriptions suggest that the dog was a Chien d’Aubry, the historical French name for the breed, and documents allude to a trained Briard having been used in the role of the dog in various versions of the play. The legend is so rooted in the culture that a statue of the fight is still a landmark in the French community of Montargis.

Readers will be happy to learn that the dog won. Macaire confessed to the murder, and was duly hanged.

Image: Briard by Zaira Dzhaubaeva is available as fine art, and in lifestyle and home decor items here