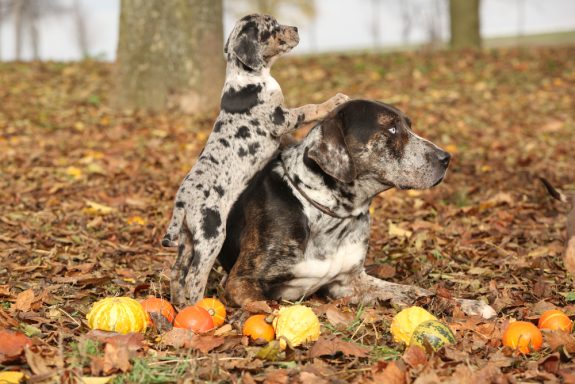 Most young readers and their parents know about “Courage The Cowardly Dog.” The animated comedy horror television series shared the offbeat adventures of Courage, a cowardly dog who had to conquer his own fears to defend farmer owners from all kinds of bad stuff. You wouldn’t think a cartoon would have a controversy, but the one swirling over this one was whether or not it was based on a true story. The show’s creators say the show was inspired by other cartoons, but a modern-urban legend hints at the involvement of the SkinWalker, a deranged serial murderer, and “Truth or Consequences,” a small town in New Mexico. It’s a rabbit hole we’re not going to go down right now, but you can read about it here.

We only mention this as a jumping off point to talk a bit about a breed that has been called the “coward dog,” and that is the Catahoula Leopard Dog.  Mind you, there is nothing remotely cowardly about this breed. The tongue-in-cheek moniker refers to the dog’s hunting style.

“Cats” were used to flush wild boar from the woods by inciting them. The Catahoula barks at the boar to get it to lunge at him, then runs away to get the boar to follow him. Pig* squeals are so piercing and loud that they can practically be heard across state lines, so they’re certainly heard by other boars in the area.  Attracted to the sounds, several curious boars will investigate, and the dog will end up drawing out not just one boar, but several.  In their attempts to get at the dog, they will instead be lead into a pen. At this point, the dog simply scales the pen wall to safety, and remaining dogs will shield the pen entrance as the owner closes the gate. As dangerous as it sounds (and is), it’s how a Catahoula “rolls.”  Cowardly? Not on your life.

**As an aside, we resisted the temptation to use the terms, pigs, hogs, and boars interchangeably because while they are all types of swine, there are differences having to do with size, diet, and location. Read up on it here.