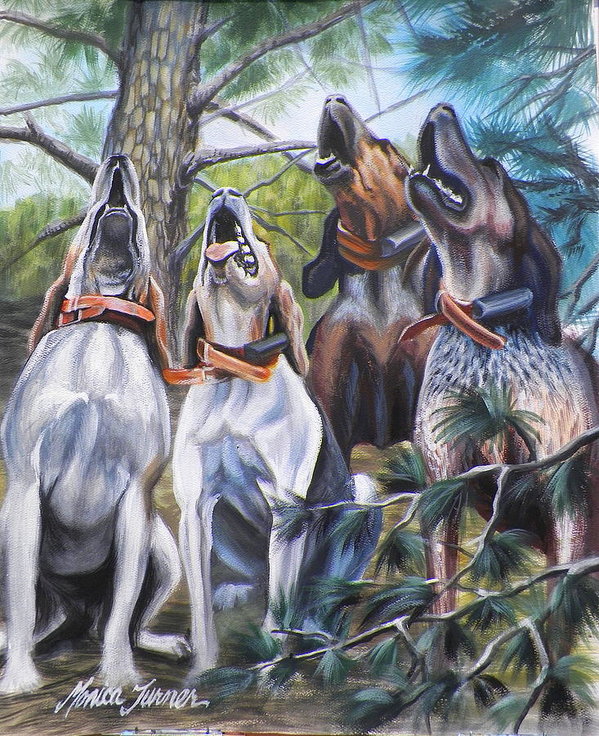 In the world of hunts, all scent hunting dogs are referred to as hounds, not dogs, and the hound who barks or bays when she sees game is “giving tongue.” Hunters will say of dogs barking on a hot trail that the “hounds are giving great tongue,” but….

…..the dog who “talks” too much,  or at inappropriate times, or when on the scent of something other than fox, or on no scent at all, is called a “babbler.” Her excessive “talking” is considered disruptive by both by huntsmen and other dogs, and because it’s misleading, many hunters will speak about such hounds in terms that are derogatory, such as calling them “liars” or as “having a lying tongue.”

Babbling can be a problem in fox hunting dogs, but also with coonhounds who bark from the time they’re let loose by their handlers. During competitive night hunts, babbling is defined as when a dog barks three times, or has been struck where no track is evident. It’s considered a fault, and some hunters believe it is an inherited trait that should eliminate a dog from a breeding program.

Old southern hunters valued a distinctive voice, and dogs whose “tongue,” “yell,“ “squall,” or “chop” had a tone or frequency that rose above the other dogs’ commanded a good price. Babbling was an unconscionable trait with no redeeming value in that world, too. Southerners didn’t mess around. Babbling cast doubt on all of a hound‘s other qualities, and on its owner, as well. Reputations were at stake.

“Sound Of The Hound” by Monica Turner is available for purchase here.