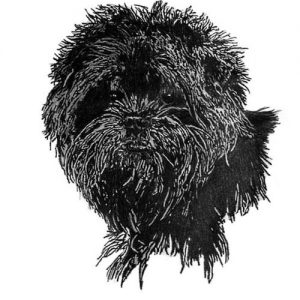 Banana Joe was the darling of the dog world when he deservedly won the coveted Best in Show title at Westminster in 2013, but Joe’s glamor was concealing a historical fact of his breed: Affenpinschers were killers.

Once known as Ratters, or Ratting Terriers, Affenpinschers as resident farm or store dogs had one purpose: Kill rats. We like rats as much as the next person, but the rats who inhabited the sewers and basements of Victorian London were bigger, meaner, and better adapted to urban life than what we have today. They were riddled with lice that carried a form of Typhus, and spread disease in granaries and kitchens. They gnawed on the hands and feet of infants, children, and elderly sleeping in their cots, and caused hideous infections (remember, this was before the germ theory of disease). It wasn’t uncommon to see rat-bitten fingers turn black and putrid on fellow citizens. Those who could afford it put arsenic everywhere in their home, but it was a less than “green” approach to a problem. In time, refined ladies discovered that “Affens” were pretty good at decimating the mice population in their closets, as well and a few Affenpinschers climbed the social ladder to a better class of vermin. Lest you feel sorry for the rats, take comfort in knowing that their demise in the jaws of a dog is very quick. A violent shake of the head, and the rat’s neck is instantly broken.  The breed’s prowess with nasty critters may suggest a terrier ancestry, but in actuality, Affenpinschers belong to a pinscher-schnauzer subgroup.

Affenpinscher Head Study by Virginia Cleary is available as a print here.
www.facebook.com/ginger.cleary