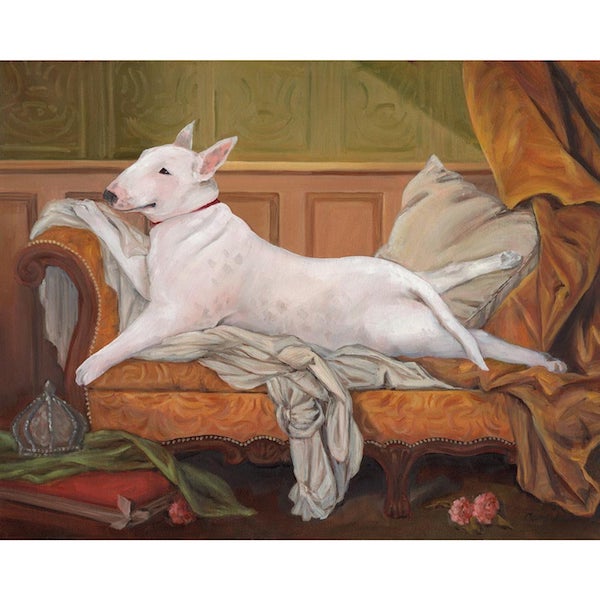 The French horror film, Baxter, was the latter, French director, Jérôme Boivin’s adaptation of Ken Greenhall’s novel, Hell Hound delving into the coldly logical mind of a murderous Bull Terrier. To be fair, the film was touted as a horror fantasy,  but no one likes to see their breed portrayed in a bad light, let alone as a sociopathic terrier, even if some critics saw the movie as a serious film about isolation, obsession, and unnatural thoughts. One comment about the movie was that it was like a dog version of “Taxi Driver,” while a movie critic wrote: “Baxter is a frightening and perverse reexamination of our relationship with dogs that uses the inhumanity of WWII to reflect the inhumanity with which we treat one another. Although it is deeply disturbing it’s use of black humor throughout the film helps ease the viewer through. Both enthralling and atrocious Baxter is the ultimate anti-dog movie.”

Certainly, movie goers can separate fact from fiction, but a well made movie can hit a visceral nerve, and we wonder how many people who saw the movie recoiled, even for a second, the next time they saw a Bull Terrier.  About the only thing we can agree with is the movie’s tag line: Beware the Dog That Thinks, and the Bull Terrier is that!  Chivalrous and brave, the brave is also notorious (in a good way) for its wicked sense of humor; in our view, witty dogs are rarely stupid dogs, and, we suspect, a deep capacity for amusement is a required trait of their owners.  We share a snippet of an article by Peggy Amaud that appeared in the Bull Terrier Club of South Australia magazine in February 1994:

One rainy morning I was standing in the driveway watching my husband back out the car when Muffin came flat out around the corner of the house carrying a length of 2 x 4. What she was intending to do with this piece of lumber has never been determined – it is possible that she was becoming bored with the demolition trade and was about to enter the construction business. Turning at her approach, I received the full impact of the wood on my shinbone and was knocked to the ground by the force where I lay screaming with pain and fury. Muff observed this odd behaviour for a moment, then deciding that she had heard all those words before (usually directed at her anyway), she retrieved her wooden weapon, and spinning it around with the grace and agility of a baton twirler, connected neatly with the back of my head as I was attempting to get to my feet. The impact returned me to my previous horizontal position, this time face down. My husband, who witnessed the entire performance informed me later that the timing was superb – worthy of the best Keystone Cops or Marx Brothers. But he delayed his departure, herded the menace into her kennel and inquired through his merriment if I was hurt. Stating I thought I might live long enough to murder the wretched bitch, I was helped to my feet but found I could not put any weight on the injured leg and my scalp was cut and bleeding – so a trip to the accident room of the local hospital was thought advisable.

You’ll want to read the rest of the article here.