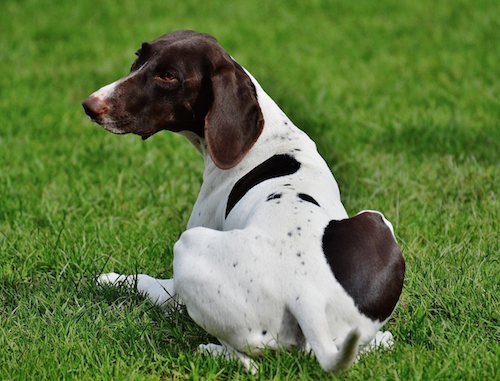 The Old Danish Pointing Dog is Scandinavia’s only pointer (according to the Nordic Kennel Union).   In its early days, it was known as the Bakhund after the person who created the piebald white and brown breed, Morten Bak, a salesman from Glenstrup. Over time, it became known as the Dansk Hønsehund, or quite literally, the Danish Bird Dog. Years later, “gammel” was added to the name which simply added “old” to the breed name.

“Old” was being accurate.

Bak developed his dog in the early 1700s, but another notable figure in the breed’s history was Johannes Matzen, a cabinetmaker from Nystad. He was the great grandson of Peder Christensen who worked with the breed in the 18th century. His son, Johannes Matzen’s grandfather, owned Old Danish Pointers until he died in 1893. With so many years of family interest in the breed, Johannes Matzen possessed pedigrees going back to the end of the 19th century, so it made perfect sense that Johannes would be an integral part of the breed club that formed in 1947, having served as secretary and treasurer from 1947 to 1963.

The breed remains a working breed today. A versatile hunter, the ODP easily adjusts for terrain and game, a welcomed attribute since Scandinavia is regarded as one of the best regions in the world to hunt a variety of game in changing seasons. Though the ODP isn’t a fast dog, it is an athletic one with an interesting style in the field: After running across a field as happy dogs do, the dog eventually settles down and moves methodically along, never breaking contact with the hunter. They scent within gun range in a fan-shape sweep, and some dogs have even been known to “army crawl” or creep along almost on their belly so as to not warn the prey. When a scent is found, the dog’s tail swings enthusiastically as he makes a full circle rotation. This lets the hunter know to come within shooting range. While the breed can manage large game, he has a fondness for pointing out heavy-bodied ground-feeding birds such as pheasants, partridges, junglefowl, chickens, turkeys, Old World quail, and peafowl.

A few years ago, the breed was Denmark’s third most popular hunting dog in terms of registrations, but in 2015, only 133 dog were registered in Denmark, 15 in Norway, one in Sweden, and none at all in Finland or Iceland. With a narrow gene pool, the parent club agreed in 2000 to overlook a program of crossbreeding to the Braque Francais, but we have yet to find much information about the results save for a mention in Craig Koshyk’s marvelous book, Pointing Dogs: Volume One: The Continentals that suggest they were not encouraging.