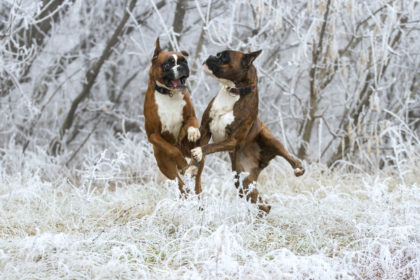 Boxer owners report that their dogs really do stand on their hind legs and bat with their front paws while playing.  Not everyone shares the belief, however, that this is how the Boxer acquired his name. In fact, Andrew H. Brace, author of “Pet Owner’s Guide to the Boxer,” feels that it’s the least plausible explanation. In his view, it was unlikely that Germany, a country consumed with nationalism, “would give one of its most famous breeds a name so obviously anglicized.”

The name goes way back. Charles Dickens named the dog owned by John Peerybingle in “The Cricket on the Hearth” “Boxer,” a common dog name in the early 19th century, but there is historical evidence that the word is found even earlier. “Boxen,” the German verb for “jab” or “punch, as well as the noun, “Boxer” were common words in the 18th century. Brace, however, tilts towards the theory that an ancestor of the Boxer, the Bullenbeisser, was also known as “Boxl,” and that Boxer is a corruption of that word.

There’s no shortage of other theories. Guillaume de Lavigne mentions in Draft Dogs, Past and Present, that in Munich, a group of dogs who were the result of crosses between the Bullenbeisser and other similar breeds were called “Bierboxer,” perhaps an allusion to the beer gardens frequented by Münchner and Münchnerin and their dogs. Boxer, then, could be either a corruption or a contraction of “Bierboxer.”  According to the publication, Country Life, by the late 19th century, the name “Boxer” was coined to differentiate the breed from Bulldogs.