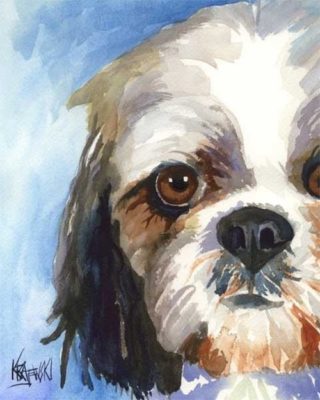 The AKC breed standard for the Shih Tzu states that insofar as color and markings go, “All are permissible and to be considered equally,” and this gives rise to a glorious palette of possibilities. Whelpings must feel like Christmas: Each delivery is like opening a present.

That said, some colors like liver (chocolate) and blue pigment colors are relatively rare since they come from recessive genes. “Blue” Shih Tzu, for instance, appear to have a slight purple hue which breeders often refer to as lavender. To our knowledge, the AKC does not yet provide a color option for this, so breeders generally will register such a puppy as a liver.

For obvious reasons, these are called “dobie markings” because they resemble the coloration seen on the Doberman Pinscher. The tan points can be found above the eyes, on the jowls, the lower legs, and under the tail.  The marking under the tail is easily spotted at birth, but other markings may not become visible until the puppy is around two weeks of age. We’re told that the AKC will register the color and markings of a Shih Tzu with “Dobie” markings as “Black with Tan Markings,” though similarly marked Shih Tzu have been registered as “Black & Tan” rather than “Black with Tan.” We defer to Shih Tzu people on the accuracy of this point.