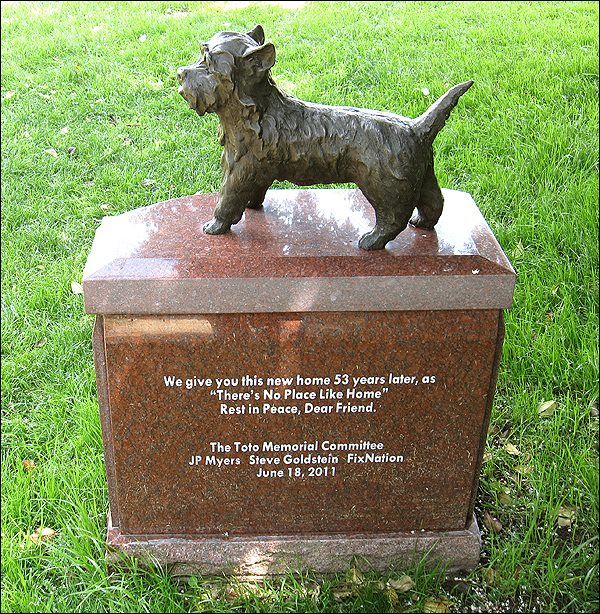 “There’s no place like home,” but the remains of the most famous Cairn Terrier actor didn’t have one.

“Terry,” the dog who played “Toto” in The Wizard of Oz, was buried where she grew up: On the ranch of Hollywood dog trainer, Carl Spitz, in the San Fernando Valley. A decade after Spitz had passed away, however, the State of California bulldozed the property in 1958 to build the Ventura Freeway, and the demolition included Terry/Toto’s gravesite.

This didn’t sit well with Terry’s fans, many of whom admired the little dog’s long career: Sixteen films, three of which were playing in theaters at the same time in the fall of 1939: The Wizard of Oz, The Women, and Bad Little Angel.

A campaign to build a proper memorial stone for Terry was launched on Facebook by J.P. Myers and author Steve Goldstein, and over a thousand people donated funds. Artist Roman Gal sculpted a life-size statue of Toto, the base was designed by Arsen Oganesyan, and Hollywood Forever Cemetery supplied a special plot and built the monument.

It is fitting that Toto have her memorial in a cemetery where many of the people who worked with her are laid to rest: Victor Fleming, Harold Rosson (The Wizard of Oz, Tortilla Flat); Cecil B DeMille, Maude Fealy (The Buccaneer); Erville Anderson, Carl Stockdale, Franz Waxman (Fury); Arthur C. Miller (Bright Eyes); Sidney Franklin, Gregg Toldand (The Dark Angel), and Ann Sheridan (George Washington Slept Here).

The memorial was dedicated on June 18th, 2011. The Cairn Terrier Club of Southern California was in attendance, and Robert Baum, the great grandson of Wizard of Oz author L. Frank Baum, even attended to pay his respects. The crowd sang a rendition of Somewhere Over the Rainbow.

A quick video shows the scene either before or after the memorial service (see the chairs set up, and note the “yellow brick road” leading to the memorial):

Visitors to Toto’s memorial can drive their car right up to the memorial. It’s located in the eastern portion of the cemetery right next to Mickey Rooney’s crypt. 34.088471, -118.317063. You can also see more photographs taken of the dedication here.