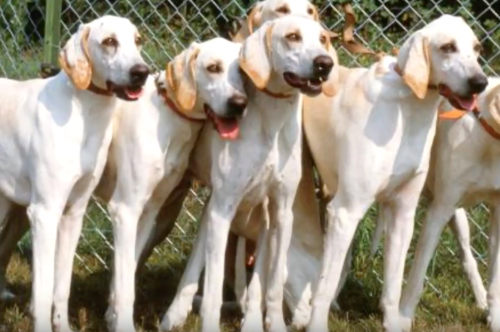 All that remains of three now-extinct hounds is the DNA found in the Billy, a French breed created by combining the Poitevin, Larrye, and the Montemboeuf, Ceris.

In terms of appearance, color was a major consideration in the foundation breeds that Monsieur Gaston Hublot de Rivault chose in developing his breed, and he was drawn to the pale colors of the Montemboeuf and Ceris lines. Rivault, however, also wanted a dog with superb speed and scenting acuity for he intended to hunt wild boar and Roe Deer with his new breed. From the Montembeouf, the Billy got the genes of a boar-hunting specialist, as well as large, sturdy bones and a beautiful off white coat peppered with orange patches. From the Ceris, the Billy got additional hunting instincts, while the Larye gave the Billy its keen nose.  These were all regal French blooded dogs, and inevitably, the Billy inherited the bearing of an aristocratic scent hound.

The breed Rivault created in the 19th century, however, was nearly extinct by the end of WWII, and had Rivault’s son, Anthony, not revived the breed by careful use of the ten remaining Billys, as well as some Porcelaine and Harrier bloodlines, we might never know this even-tempered, low-maintenance hunter with the melodious voice. Billy numbers are now stable, but the breed is exceedingly rare outside of France. They were recognized by the FCI in 1973 , and by the UKC in 1996.

You can see more photos of the Billy at Royal Canin’s website. The thumbnail image seen here was found on Pinterest and is happily credited upon receipt of information.

One thought on “Billy, the Breed”