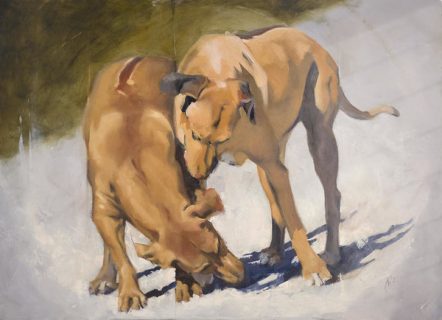 Not necessarily. We’ve often found information about different dog breeds on-line that are inaccurate. When we came across the statement that Rhodesian Ridgebacks are immune to insect bites, we checked other on-line sources that basically confirmed each other, and suspiciously, in the exact same words.  Still not convinced, we asked the owner of multiple Ridgebacks for her opinion. After (we suspect) she was done laughing, she said, “Oh lord no. Absolutely not. They are utterly ravaged by bug bites.”

She went on to explain that black flies and mosquitoes love Ridgebacks, and deer flies are mercilessly fond of their muzzles and the tops of their heads. She makes a point of telling puppy owners never to leave their Ridgeback pup unsupervised outside for extended periods in areas where there are lots of mosquitoes. A Ridgeback that she once collected had been in a dog run for several hours, and it looked as if the dog had hives! Our friend concluded by saying that a writer who states that the Rhodesian Ridgeback is immune to insects bites never owned one.

One particular TV show states that Ridgebacks –  the “Navy Seal of Dogs”  –  never get bug bites, but they have it only half right. This hearty, muscular breed possesses the courage to circle and face down lions in Africa, and keep them at bay until hunters arrived. Smart enough to avoid crocodiles and snakes, strong enough pull down large game, and possessing the endurance to run for miles, we fully accept the breed’s moniker as the “Navy Seal of Dogs,” but immune to insects?

That would be a negative.

One thought on “The “Navy Seal” of Dogs”