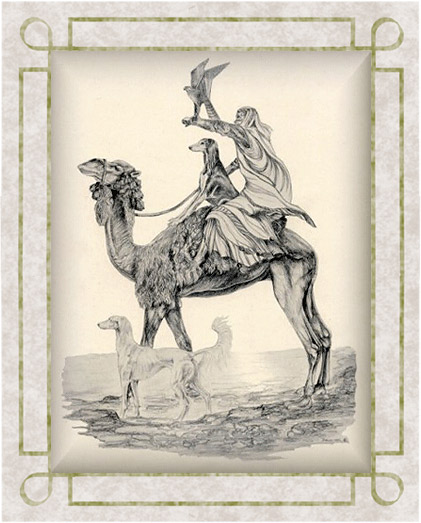 At one time, the Saluki was considered to be the oldest pure breed dog in the world, and modern tools have determined that it is certainly one of the most ancient of the domesticated dogs. Historians have identified it as “a distinct breed and type as long ago as 329 B.C. when Alexander the Great invaded India,” but excavations of tombs in the upper Nile region and the Sumerian empire unearthed carvings of dogs identical to the modern Saluki, digs that went back to 7,000-6,000 B.C.  Evidence has also been found in Egypt that Pharaohs hunted with Salukis partnered with falcons, the same exact hound appearing on the Egyptian tombs of 2100 B.C. The dogs were often mummified after death, a distinct honor. Some cynologists believe there are Biblical references to the breed, and some interpret the Koran has having described them as sacred gifts from Allah. It is true that Salukis were regarded as “clean” by Muslims for centuries. They were allowed to touch them, and let the dogs live in their homes, including women’s quarters. This was simply not accorded other dogs. Tradition held that one never sold a Saluki, but gifted the dogs to very special persons, or in exchange for a wives, horses or camels.

Desert people were nomadic, and the tribes that developed this breed were nomads that took their Salukis from the Sahara to the Caspian Sea.  Local weather, terrain, and the type of game hunted lead to some natural variations in the breed’s coat, size and type. Salukis that were eventually imported to Europe and the US came from many different old original types, and the breed standard is worded to allow for this fact.

The origin of the name is less certain. The breed may take its name from the ancient Yemeni city of Saluk, or from the Syrian city of Seleukia, but it may also be a transliteration of the Arabic word for hound.

Salukis were first brought into England in 1840, but it wasn’t until after World War I when many British officers returned with dogs from the Middle East that the breed became established in Great Britain. At the time, they were known as Persian Greyhounds (though some circles called them “Gazelle Hounds), and when Lady Florence Amherst imported a pair of Arabian Salukis from the kennels of Prince Abdulla in Transjordania to Norfolk, England in 1895, the breed got more notice. The same year that the Kennel Club of England recognized the Saluki and adopted the first breed standard, the Saluki/Gazelle Hound Club of England was formed – 1923.

Four years later, the Saluki Club of America was formed, and the AKC officially recognized the breed as a member of the Hound Group. The first Saluki registered by the AKC was Jinniyat of Grevel in 1929. In 1932, several Amherstia Salukis were imported into Massachusetts, and additional new blood was introduced in 1945 when two Arabian desert Salukis, one of each sex, were brought to America. We’ve read (and we hope Saluki folks can verify) that the AKC made a special ruling for only the second time in history that allowed the offspring of the pair to be officially registered in the US . Their progeny did very well in shows.

As with so many breeds, the Saluki had suffered during World War II, and many were lost to bombings, starvation, and euthanasia, but committed owners and breeders saved the breed from extinction and we’re able to admire this breed today.