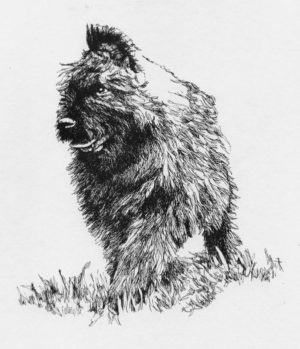 This was a large, wiry black dog with a deep chest,  less coat and shorter hair.  By all accounts, it was an impressive helpmate that worked not by chasing, but by blocking and moving lead cows. Along with the shorter and barrel-chested Paret style, it eventually developed into the Bouvier Belge des Flandres recognized in 1910 by the Societe Royale St. Hubert, Belgium’s national kennel club.