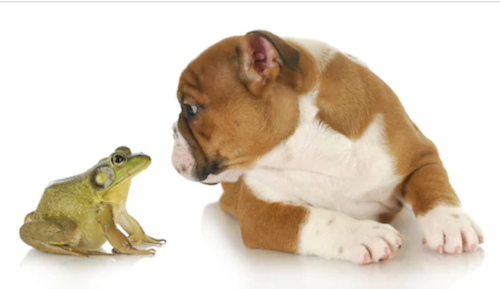 Some say we live in an age of suffocating political correctness. Others say our sensibilities have simply matured. Either way, we’ve come a long way from when we thought nothing of using stereotypical epithets, like, say, referring to a French person as a “frog.” In a less inspired time, the term was tossed around freely, and it bled into the dog culture, as well. Harold R. Spira’s terrific book, “Canine Terminology” tells us that,”British Bulldogs resembling the French variety came to be known as ‘frog-faced’ because of the description of the French as ‘frogs’ or ‘froggies.”

The PC police would be gratified to learn that “frog” does not appear in any of the 193 breed standards of the AKC, but the term is nevertheless still used “outside the ring.” Spira adds that “Frog faced” is a “reference to the somewhat unusual expression of the Rottweiler caused by this breed’s rather wide mouth and lips that gradually fall away from their centre towards the corner.” Inasmuch as this reminds us of the Wide-Mouthed Frog joke, we’ve actually heard a breed veteran use the word in this context. 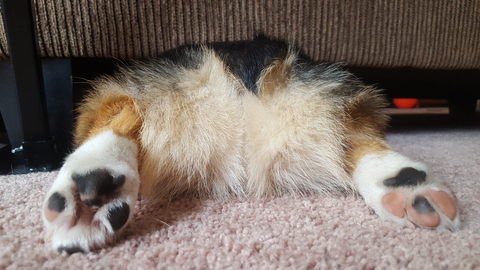 The French Bulldog is sometimes called a “Frog dog” not only for its loveable wide round face, but for the way some of these dogs sit with their hind legs spread out; in that context, “froggie” is used by many breed owners when their dogs sit similarly, though we’re told that Corgi owners call this a “sploot.”

A frog reference is not always a good thing. Back to Harold Spira: “Frog Face: Faulty facial construction in brachycephalic breeds, especially the British Bulldog, in which the nose extends too far forward.

Our understanding is that such a scenario in a Bulldog comes down to angles. The ﬂat of the dog’s nostril shouldn’t be vertical but should slope backwards. When an extended nose is accompanied by a receding jaw and large protruding eyes, it’s is called a frog-face.

If by now you’re wondering (as we did), how the French came to be called “frogs” in the first place, theories abound.

According to the history book, “Holy Blood Holy Grail,” the earliest Frankish kings had both bees and frogs embroidered on their royal robes, and both images have been found in the royal gravesites of Clovis and his sons in France. The reference, then, seems to point to the royal line of Frankish kings as “frogs,” “Long Haired Kings” who ruled in Gaul/France/Germany before the Christianization of Charles.

Some say it comes from one of the cuisine specialties of the Burgundy area, frogs legs. Others say it had nothing to do with eating frogs legs, but was a term coined by the French nobility as a disparaging nickname for the inhabitants of Paris. The land surrounding Paris was so notoriously swampy that 18th century kings and courtiers of Versailles habitually referred to the Parisians as Les Grenouilles. Foreign diplomats picked up on the word, and over time, it came to be used as a reference to the French in general.

There are those who scoff and say every one of the aforementioned theories is wrong. The term was born during World War II when camouflage worn by French soldiers made them look like frogs.

No, no, no, others say. The term dates back to Queen Elizabeth I who evidently had a fondness for frogs. Her Majesty used it as a term of endearment to close friends including the handsome young ambassador of France with whom Elizabeth had formed an infatuation as a young woman. She referred to him as her “Dearest Frog.”