A curious thing happens to breed standards over time. Some get shorter, some get longer,  some have old words substituted with new-and-improved words, and in some standards, words are omitted altogether.  A few terms fall out of fashion or are removed because they no longer apply to a breed that has improved over time.

We can’t say which of the aforementioned reasons is why the Bull Terrier’s AKC breed standard from 1929 had as one of its disqualifications a “pig-jaw,” and that the current one (approved in 1974)  doesn’t, but we still wanted to know what a pig jaw is (and for anyone wondering, the other DQ from 1929 included a wall-eye, a wholly flesh colored nose, and a tail carried over the back).

The ideal Bull Terrier skull is unique in dogdom. Its deep and smooth shape is similar to an egg and filled completely, a surface devoid of hollows or indentation, but in 1929, the word, “egg,” didn’t appear once.  That old standard wrote that “when viewed from above the skull should taper gradually and merge into the muzzle without break in the line.” It added that there “should be a slight indentation down the middle but without ‘stop’ and without noticeable brow.”

It took some sleuthing, and we came upon an interesting factoid. Be forewarned that we were unable to verify the veracity of this claim, but it maintained that the Afrikaan’s name for the Bull Terrier was Varkhond which means pig-dog, and not because of any resemblance to a pig, but because cross-bred bull terriers were used in the past for bush-pig and warthog hunting in South Africa, particularly in the Eastern Cape. Underscore “crossbred.”

One site writes that when a Bull Terrier has a small, snipey head and an overly short and narrow jaw, it’s often referred to as a pig jaw. Another opines that an overshot bite, uncommon in the breed, has been referred to as a “pig jaw,” typically the result of retained baby teeth, minor discrepancies in the rate of jaw growth, or trauma.

We also learned (parenthetically) that because white Bull Terriers have marvelous large, pink ears that reminded some people of pig ears, it one lead to a breed nickname—“pig dog,” but this isn’t the same thing at all. We found the following helpful image on a breed forum that was posted almost eight years ago, and we would very much like to credit the original source. Our own efforts keep taking us back to Pinterest where the image is unattributed: 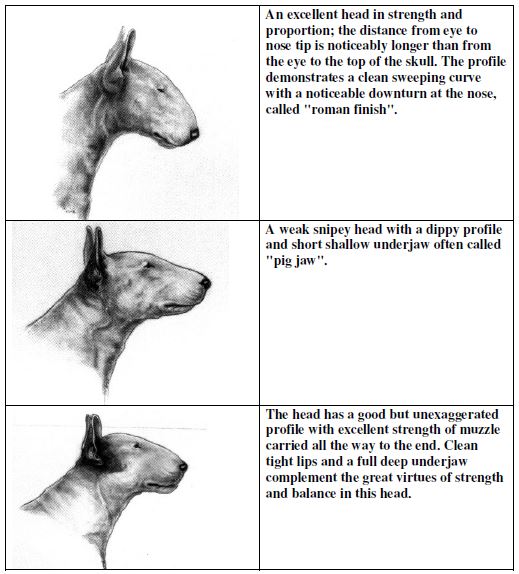 We are fond of this breed, one that is as far removed from our chosen breed as is possible, but there is a a lot to admire about the Bull Terrier, and we are unabashed fans. As we are also partial to pigs, we aren’t offended at a few comparisons. That said, a Bull Terrier with a “pig jaw” as described really has a different look from what most of us have come to like in the breed. That we, ourselves, have never seen this in a modern Bull Terrier is surely a testament to the breeders.

As for our top image, we found it unattributed on Pinterest, and will happily credit it upon receipt of information