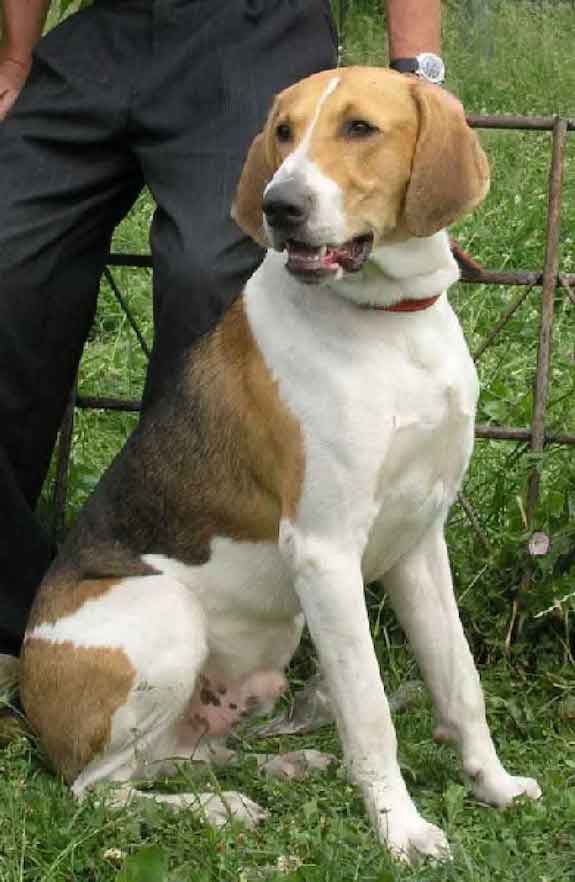 The Russian Hound was a land race indigenous to Russia, which is to say it developed a phenotype without selective breeding. Traditionally, the dogs were used to hunt with Borzoi, the Russian Hounds locating and sending the game to the field, the hunters awaiting there with their Borzois for more chase.  Selective breeding began a century later, and after the first breed standard for the Russian Hound was developed in 1925, breeders crossed it with English Foxhounds. The result was the Russian Harlequin Hound. By the 1930s, the dogs of S. M. Glebov, P. A. Bereznikov and I. L. Kramarenko,  a group of hunters, were considered the most successful in all regards.

A hunting dog through and through, the Russian Harlequin is said to be very sociable and gregarious, but he has a high prey drive and a need for a lot of exercise, possibly the only two drawbacks that keep him from being more popular.  Until 1951, it was known as the Anglo-Russian Hound, but when it was recognized as potentially being a breed unto itself, it became known as the Russian Harlequin Hound.

With a melodic tongue and admirable speed and stamina, these dogs were used as “Red Chase Dogs,” a dog that goes after “red game,” namely wolves and fox rarely found outside of the former Soviet Union.  One might see a Russian Harlequin Hound at a Russian dog show, and writer, David Hancock, ways that the Moscow Society of Hunters and Fishermen has an annual exhibition where one might see a Harlequin. The dog’s fans consider it on a par with the quality to the best of Russian Hounds, but while some say breeders are still working on improving consistency, there are those who regard the Harlequin as nothing more than a blend of the Russian Hound and the English Foxhound.  No kennel club we’re aware of recognizes it.

So why are we mentioning it on a page devoted to purebred dogs?

Because the Russian Harlequin Hound was used by William Dunker when he developed his breed, the Dunker Hound (called the Norwegian Hound by the FCI), and that is a purebred dog recognized by the United Kennel Club in 1996, and by the FCI in 2016.

To understand our breeds, we think it’s worth knowing what went into their creation.