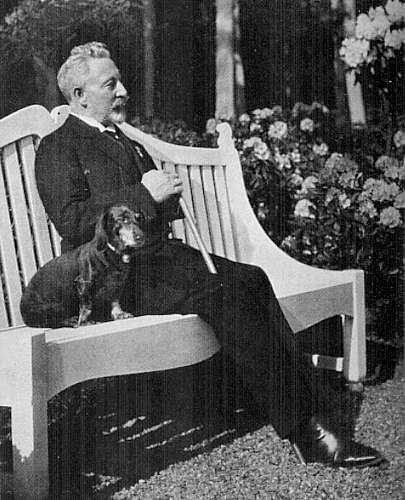 Kaiser Wilhem II was devoted to his Dachshunds. He buried at least five beloved Dachshunds in the park at Huis Doorn, his residence-in-exile after WWI, and built a memorial to his faithful Dachshund “Erdmann.”  His best known dogs, however, were Wadl, Hexl and Senta.  Indeed, for Senta, his favorite, the Kaiser erected a stone marker on the grounds. He was blessed to have had Senta for so long. Senta died in 1927 at the age of 20.

Not everyone, however.  was enamored with the Kaiser’s dogs. On a visit to Austria to visit Archduke Franz Ferdinand at Konopiště, his country chateau, Wadl and Hexl gobbled up one of the Duke’s golden pheasants.

Henry William Fischer in particular wrote a scathing review of the dogs:

“Nearer to the Kaiser than all these faithful servants his two Dachshunds, called Teckels. Biting, snarling little brutes with jaws measuring half the length of their smooth bodies, and a corresponding penchant for people’s calves, skirts, and petticoats. Except to the bedroom, from which they are excluded out of respect for the Empress’s legs, these pets follow his Majesty everywhere, and when they make inroads on folks’ ﬂash and blood, or clothes, William, who protects and coddles them, thinks it huge fun.

Whether the cunning Teckels know their imperial patron’s overpowering position, I cannot say; but it looks almost like it, for, in the exuberance of their mischievous spirits, even the little propriety pounded into them in their earliest youth is now neglected, and Court-marshal von Eulenburg, whose pleasant duty it is to make both ends meet in the royal ménage, has his hands full covering up the damage to furniture, decorations, and bric-a-brac in the Teckels’ path, or to such articles as they are able to reach by high vaults and other caprioles that the Kaiser has taught them.

” Why don’t you poison the beasts ? ” once said Eulenburg’s colleague, pious Baron von Mirbach, who is on the Empress’s staff, when his Excellency had carried him with a jeremiad [a long, mournful complaint or lamentation] about the Dachshunds’ wickedness. “ I have thought of that myself, and would gladly go to this extremity, seeing that it meets with your most Christian approval, if I were sure that there would be no successors. But his Majesty might take it into his head to surround himself with Danish hounds, like Bismarck, and then none of us would be safe.”

More “juicy” tidbits are written, and you can read them at no cost here, but readers should know that between the Kaiser’s apparent tolerance for naughty behavior, and the marvelous job that heritage breeders have done, Dachshunds have friendly, curious, and spunky temperaments.