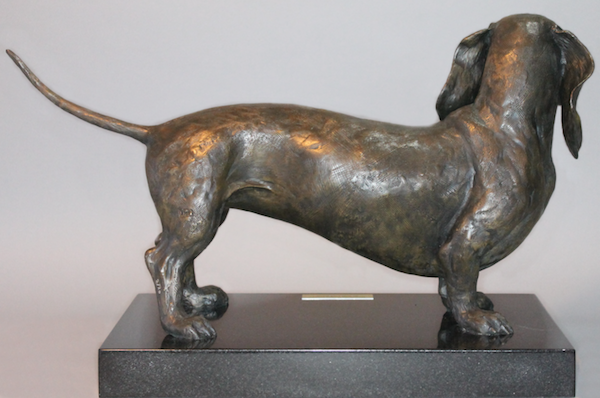 By AKC standards, the Dachshund is bred and shown in two sizes, standard and miniature, the latter not a separate classification but a size that competes in a class division for “11 pounds and under at 12 months of age and older.”

The Germans, however, (which is to say the FCI of which the country is a member), divide Dachshunds into three sizes: Standard (or Normalgrossteckel), Miniature, and Rabbit Dachshund (also seen as “Kaninchen”), or as the FCI standard writes it, “Teckel, Miniature Teckel and Rabbit Teckel.” As an aside,  Kaninchen Dachshunds are smaller than the typical miniature Dachshunds with a chest circumference up to a little around 13 inches measured when at least 15 months old. The Kaninchen Dachshund was originally bred to hunt rabbits and has been popular with hunters ever since its introduction in the 1800s because of its small size, but with the same amount of courage, cleverness, and tenacity of its larger cousins.

Ever practical, the Germans divided the breed into sizes based on the size of the hole the dog could enter. After all, this is a hunting breed that goes to ground.

Six years ago, there was discussion about a size restriction for Dachshunds which involved both the German Dachshund Association and the Welt Union Teckle. We don’t know how it ended (and if someone in the know could tell us, we’ll amend this post), but you can read the fascinating article about it here. It includes the sentence, “In Scandinavia the measuring tape is pulled much tighter than e.g. in mainland Europe, this would count for 1-2 cm difference in the circumference of a miniature Dachshund.” Fascinating!

Image: “Life Size Dachshund” by Todd Lane completed utilizing the traditional “lost wax” method of casting bronze sculpture. Selected For The 2020 St. Augustine Art Association Honors Show, the artist wrote: “I was inspired to sculpt a Dachshund (badger hound) because of their diminutive stature, yet tenacious character. Aft”er studying several of these dogs, I was fascinated by how the underside of older Dachshund’s formed an almost straight line from front to back legs. While the same area of their younger counterparts (like the one I’ve sculpted) formed such an exaggerated arch. This made for an interesting artistic challenge in addition to their length.” More views of this piece, and details on how to buy it, may be found here.