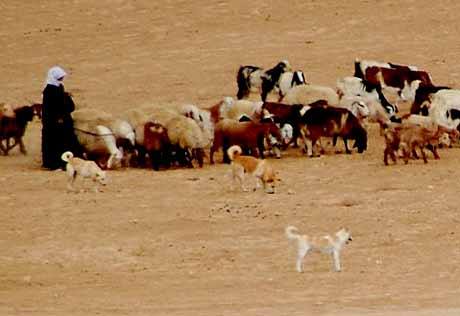 Figures vary as to when the first dogs descended from wolves, but most scientists believe it occurred somewhere between 14,000 and 40,000 years ago, give or take a millennia. Those early critters have been called,”proto-dogs,” and there’s a breed in our midst that gives us insights into how they lived: The Canaan Dog.

Before the Israelis actively sought to preserve this ancient breed named after the biblical region from which it originated, Canaan Dogs lived a life style as described in the Proto-dog’s story. They followed Bedouin Nomads and lived on the fringes of camp while scavenging for a living, not really belonging to anyone. On occasion, a Bedouin would notice an exceptional pup in a litter and take ownership of it to use as a herding dog or guard, but the dog still lived on the edge of camp and either foraged or lived off of scraps. According to the site, Better Canine Health, if a Bedouin was asked to whom the dog belonged, they would answer, “Allah” because they didn’t view the dog as theirs.

The Canaan Dog’s story is a fascinating one, and a blog that appeared in a recent “Times of Israel” offers better insight into the breed’s history. Find it here.