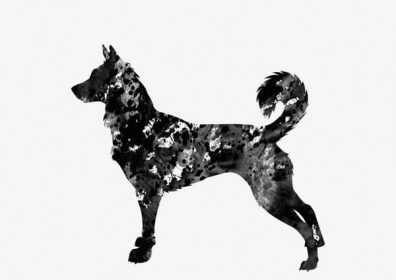 We are fortunate to have among our readers people who are experts on their respective breeds. We’re not always able to reach out to them before publishing a post, but we know we’ll hear from them if we get something wrong, and that’s not a bad thing. We’d rather be accurate than right (if that makes sense), so when we post about the Canaan Dog, we know we have fact checkers in the wings.

The AKC breed standard makes no mention of more than one type of Canaan Dog, but we came across a site that referred to two types by name. The original type is what Professor Rudolphina Menzel (discoverer of the breed, author of the standard, and the person responsible for gaining recognition for the Canaan Dog) came across in the desert and which is called the “American type,” “classic type,” “old type” or “Dugma type” (the Dingo/American type was never purposely bred).  A more recent type of Canaan Dog called the “Israeli Type” or “Laish Type.”  Not surprisingly, there has been debate over both types, and which one is correct.

As far as we can tell, differences between the two lie in the ears, tail, and build. The Collie Canaan has a prick ear similar to a German Shepherd Dog, while the Dingo Canaan has more of a flatter button ear. The Collie Canaan’s tail curls up around the back while the other’s tail lays in a sickle-like shape. We believe that Dr. Menzel acknowledged both as true Canaans, but interestingly, she had actually identified and divided these pariah dogs into five types:

Our understanding is that Dr Menzel preferred Type III type dogs, and she called one of the first dogs in her Canaan pack “Dugma,” which means model. Dugma was the type of pariah dog that Dr. Menzel saw as the model of what she wanted in a Canaan. Everything that Dr. Menzel hoped for in her breeding program, however, was realized in a later dog named, “Laish,” and it was Laish who became the first Champion Canaan Dog in Israel. There is a photo of Ch. Laish me Bnei HaBitachon in Myrna Shiboleth’s book, “The Israel Canaan Dog,” and he was evidently a sire of tremendous quality.

Myrna Shiboleth, a friend of National Purebred Dog Day, has been breeding Canaan Dogs for over 30 years and acquired some of her original stock from Dr. Menzel. Perhaps we’ll be fortunate enough to hear from her about this topic!

Image: Canaan Dog by Erzebet S is available as fine art, and in home decor and lifestyle items here