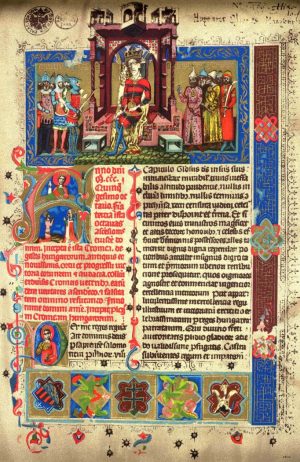 If you’ve ever watched the game show, Jeopardy,” you know that questions are posed as an answer, and contestants must correctly pose the question.  In this post, the correct Jeopardy answer is: What is a Carmelite?

The question is less straightforward. The collective term, “Carmelite Family,” refers to people who feel inspired by the spirituality of Carmel, individuals such as friars, hermits, cloistered nuns, active sisters, and lay people. In a nutshell, Carmelites seek to be contemplatives. It’s no surprise, then, that the very first Carmelites were hermits living on Mount Carmel in the 13h century. When the hermits left Mount Carmel from the 1230’s on, they settled in hermitage communities in western Europe where they perceived a desperate spiritual and social need to be of service, especially among the poor. The Carmelite Friars are now the oldest continually-surviving branch of the Carmelite Family.

Over the years and on these pages, we’ve posted several instances where purebred dogs have been created, developed, protected or promoted by the clergy, and it seems that we can add Carmelite monks to the list. In 1357, King Lajos the Great, aka King Louis I of Hungary, ordered the Carmelite Friars to write about the Vizsla, and it was their “scribblings” that is the first written reference to this breed. Their words were recorded in the Illustrated Vienna Chronicle (or Becsi Képes Krónika) a document that represented the international artistic style at Louis’ royal court. The 147 pictures of the chronicle included information about the culture, costume, and court life in medieval times, and the illustrations drawn with detail were inserted into the text of the volume. The real purpose of the book, however, was as an engagement gift.  Louis’ daughter, Katherine, was to marry Louis de Valois, Prince of Orleans, of France, and the lavishly illustrated book was intended to educate the French about the Hungarians by including a chapter on falconry which featured a picture of the Vizsla. We’ll never know if Louis de Valois got the hint,  but most of our readers would be apoplectic with joy to get such a book as a gift.