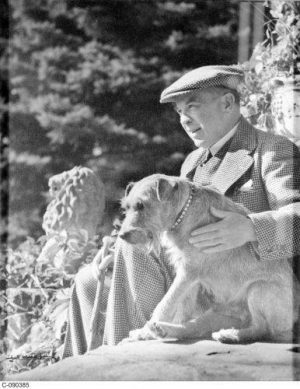 Prime Minister William Lyon Mackenzie King was Canada’s longest serving prime minister, and according to many Canadian historians, possibly its most eccentric.

King was a bachelor, a solitary man with few close relatives and even fewer close friends. A six month old Irish Terrier (a breed he affectionately described as “red, racy and rectangular”) given to him by Godfroy and Joan Patteson in 1924 became his constant companion. He named the dog, “Pat” (as he would all the Irish Terriers that followed), and doted on the dog. He read to “Pat,” shared with him his bedtime snack of oatmeal cookies and Ovaltine, and according to accounts, believed that “Pat” was inhabited by the spirit of his late mother. When an elderly “Pat” was ailing in 1940, King postponed a wartime cabinet meeting to be with him, and when seventeen year old Pat passed away, King sang “Safe in the Arms of Jesus” to the dog  (if that’s being peculiar, we know a lot of eccentrics). King had praised “Pat,” as “a God-sent little angel in the guise of a dog, my dear little saviour.” A man who was distant in his relationships with his fellow humans was quick to recognize the faithfulness of the dog, concluding that dogs are perfect animals in that they “ask only to be near your and to share in a companionship of pure trust.”King credited “his little friend” with teaching him about honor and fidelity. 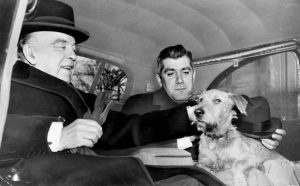 The Pattesons gave King another Irish Terrier, “Pat II,” shortly after the first Pat’s death in 1941. Pat II became King’s new canine companion, but sadly, this Pat died only six years later. King got his third “Pat” in 1948 as he was preparing to retire from politics. “Pat III” was King’s constant companion until King died in 1950. Following King’s death, “Pat III” was given to King’s friends.

In diaries released after King’s death, it was discovered that King had often used an Ouija board or crystal ball to communicate with the first two “Pats” about matters of national policy, and wrote of his belief that he saw meaning in whether they wagged their tails at certain news or not. The public likely saw a mild-mannered, if not bland, prime minister that was there to help Canada out of the Depression and through a grueling world war, but if he was peculiar, he kept to himself his beliefs in numerology and spiritualism (at least until after his death). His close relationships with his dogs seemed to help the man do his job, and we’d bet that in that regard, he wasn’t peculiar at all.

One thought on “Canada’s Prime Minister & His Irish Terriers”