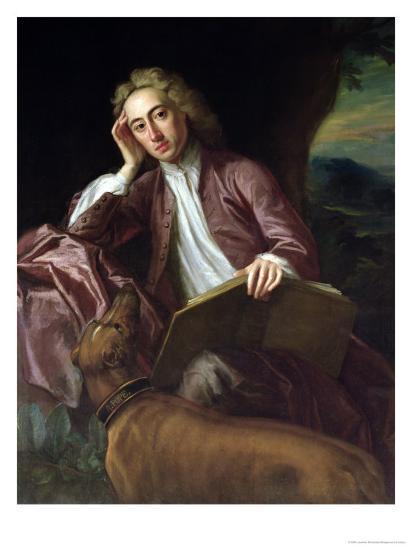 As odd as any of may think it is to name every dog we’ve ever had by the same name, there examples of people who’ve done just that: Canada’s Prime Minister William Lyon Mackenzie King named every Irish Terrier he ever had “Pat,” and Alexander Pope named every Great Dane in his life, “Bounce.”

On the subject of the poet, Alexander Pope, more than one hundred references to Pope’s favorite dog is found in his poetry, and depending upon the context, the breed was portrayed as a loyal friend, insatiable beast, or a silly creature.  Scholars have made much of (arguably) Pope’s most quoted line that was engraved on the collar of one of his puppies whom he gave to Frederick, Prince of Wales.  It read, ““I am his highness’s dog at Kew; / Pray tell me, sir, whose dog are you?”  More than a simple notification of identity to anyone who happened upon the dog, Pope revealed, perhaps a bit cynically, his view of human nature that people were either loyal, a sycophant, or ravenously ambitious.

And they thought it was just an engraving on a dog collar.

Bounce died while being looked after by John Boyle, the 5th Earl of Orrery.  After her death in 1744, a letter that Pope wrote to Orrery read, in part: I dread to enquire into the particulars of the Fate of Bounce.  Perhaps you conceald them, as Heav’n often does Unhappy Events, in pity to the Survivors, or not to hasten on my End by Sorrow.  I doubt not how much Bounce was lamented: They might say as the Athenians did to Arcite, in Chaucer,

Ah Bounce! ah gentle Beast! why wouldst thou dye,
When thou hadst Meat enough and Orrery?

This couplet, later to be known as “Lines on Bounce,” was the last ones that Pope ever wrote because he died less than two months later.