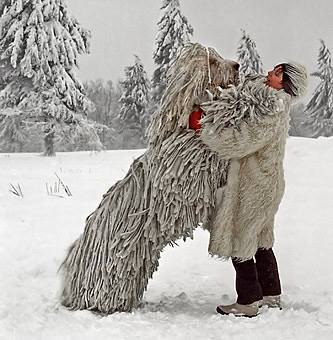 Canis familiaris pastoralis villosus hungaricus – the Komondor. Not as much is known about the historical backgrounds of Hungarian dog breeds as we’d like because so many records were destroyed during wars and occupations. It‘s thought that like the Puli, the Komondor descended from Tibetan dogs brought to Europe by the Cuman people, a Turkic nomadic people. In the late 900s, Mongols began to expand their territories forcing the Cumans to move westwards. Fleeing from the “Mongolian horde,” the Cuman reached the borders of Hungary where they were granted asylum and settled in 1239 under Köten Khan.

Some of this we know because Komondor remains have been found in Cuman gravesites.  Etymologists believe that the name, “Komondor,” derives from “Koman-dor,” meaning “Cuman dog.” “Komondor” was mentioned for the first time in 1544 in a Hungarian codex and has since been declared one of Hungary’s national treasures to be preserved and protected.

We found this wonderful image on Pinterest and would like to get (and give) credit for it. Anyone?