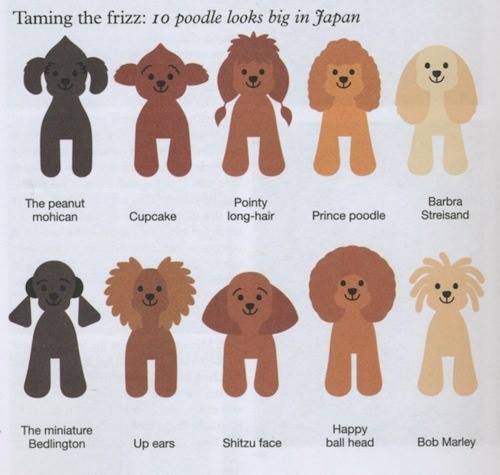 A couple of years ago, Asian Fusion Grooming was the rage among Shih Tzu, Poodles, Maltese, Schnauzer, and Yorkie owners in Japan, China, Taiwan, and Korea. Outside those countries, everyone else was fascinated by the uniqueness of the trims, if not the “how” of them.  Asian Fusion (also called Asian Freestyle) ignored breed standards, opting instead to give a dog braids, ponytails, and scissoring that called for thinking outside the box, a good thing because some of the dogs’ heads were trimmed to be shaped like a box (others were trimmed to have extreme roundedness)  – and that’s a hallmark of Asian fusion: The head is the focal point.

Another distinction from western trims is Radical Symmetry that encouraged over-emphasizing certain parts of the dog, i.e., columned legs in which the hair cut is tapered at the top and flares at the pasterns as if the dog is wearing bell-bottom pants.

We came across this two year old video to give you a sense of what we’re talking about:

To see some really stellar examples, do a search on Pinterest for “Asian Grooming Grooming,” or check out this page. There’s also a book of instructions that you can find here.