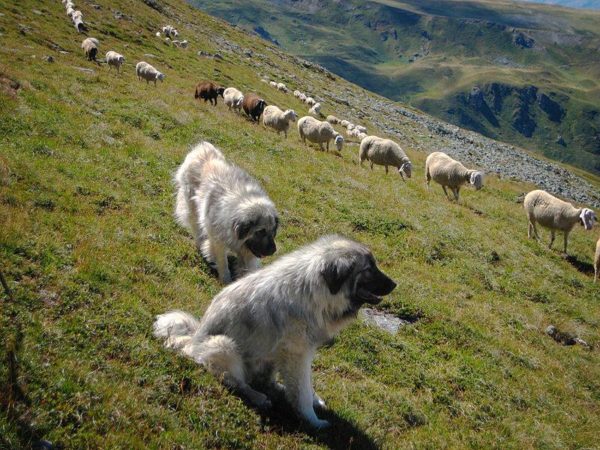 Just as herding dogs have a “style” of work (eye/no eye, drove/gatherer, and so on), livestock guardian dogs can differ in how they do their jobs.

The Sarplaninac (seen here) is a reactive breed to whatever he sees as a threat, and this can include unfamiliar dogs. He is not an excessive barker who barks for the sake of hearing his own voice, but will sound the alarm when necessary. This is an active guardian that typically patrols his territory,  and indeed, will “police” known trails that predators favor. “Shars” will often venture to a high spot, be it a rock, crest, or hill,  to oversee their flock as well as the parameters around it, and for good reason. The Sarplaninac is acutely aware of his surroundings, and has an uncanny ability to spot things almost as they happen. As with most intelligent breeds, and particularly those bred to make decisions, the Shars is independent and what some might call stubborn. We prefer to regard this last trait as free thinking.

By know, you may have surmised that this is a problem solving breed. She likes to alternate between working close in (including an inspection of the newest lamb, kid, or calf), and working on the outskirts. Nurturing to those in their care, the Sharplaninec (a Macedonian word which means “Shara Mountain Dog” and named after the Shar Planina Mountain range where it’s the most common) has a high protective drive and will stand up to face any predator.

Sharplaninac are bred all over Macedonia, Serbia and other Balkan countries today, and there’s a growing interest in the breed from the rest of the world as ranchers come to realize the efficacy (and “green”) alternative that LGDs offer.  The Yugoslavian state controlled breeding these dogs until the 1970s, and it wasn’t legal to export a Shar for some time. In fact, the first Sharplaninac that came to the United States was literally carried off a mountain by mule.