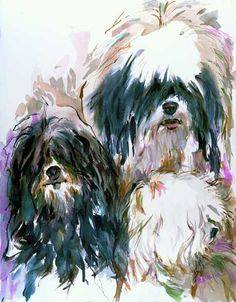 Did a Havanese inspired Charles Dickens’ character, Tiny Tim? We may never know, but we do know that the author had a Havanese named, “Tim,” who was beloved by his seven children.

The breed known as “Habaneros” in Spanish is the National Dog of Cuba, and one source maintains that the breed developed from Bichons that came from Europe. These dogs weren’t suited to Cuba’s climate, and over time, the dogs that did adapt came be known as the “Bianquito de la Habana,” or Havanese Silk Dog. Smaller than than the origional Bichons, these had an all white coat that was silky. Enter the 19th century, and Poodles coming into Cuba from Europe were bred to the Blanquito de la Habana, creating today’s Havanese. The Blanquito de la Habana is now extinct, but happily, Havanese (singular or plural, the name’s the same) are thriving. BTW, Havanese can be corded! We always defer to breed experts, so input is welcome!