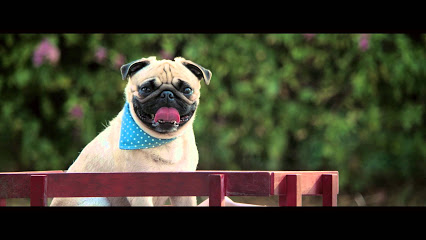 When Vodaofne and Hutchinson Essar’s cellular service in India embarked on an advertising campaign in 2008, they hired Ogilvy & Mather in Mumbai. The “You & I” advertising campaign story line was simple: A dog follows a boy in unlikely locations prompting the tagline, “Wherever you go, our network follows.” The first hire was the child actor, Jayaram, but at the suggestion of an assistant at Nirvana Films, makers of the ad, a Pug named “Cheeka” was suggested for the role of the dog.   The pair first appeared on TV, billboards, newspapers and bus shelters in 2003 and became instant celebrities all over India.

“Cheeka,” who is from the United Kingdom and is owned by Vishal and Lisa Bandekar of Goa, earned earned ₹150,000, or $2,235.00 for the campaign. Not surprisingly, Pugs became popular in India to the extent that sales of the breed more than doubled within month and “Cheeka” became the most popular wallpaper downloaded by Hutch customers onto their phone screens as of 2005.

In 2012, Cheeka returned to Vodafone’s television commercials with an ad that promoted ‘instant connections’ on its network, by helping a young boy connect with a girl:

In March of 2016, Cheeka made another comeback with SuperNet 4G: