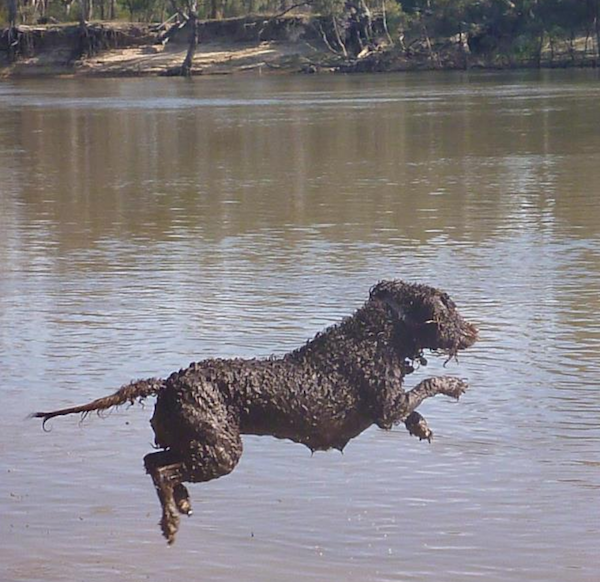 The more we research, the more we uncover the vastness of our dogs.

While researching the very cool Curly Coated Retriever, we came across references to a version that in Australia is regarded as an entirely separate breed, though many would regard it as a regional type at best. Known as the Murray River Curly-coated Retriever, this smaller, but popular duck dog was found mainly around the Murray River in the southern part of the continent. The folks who lived on the banks of this river needed a dog to retrieve shot birds for the cook stove. By some accounts, the dogs were breeding true to type since 1894, and if we fast forward to 2012, we learn that seventeen MRCCRs swabbed for DNA were found to have DNA characteristics of a purebred breed.  Furthermore, they were determined to be more closely related to spaniels than to retrievers (results show relationships with the American Water Spaniel, Chesapeake Bay Retriever, Curly Coated Retriever, English Springer Spaniel and Irish Water Spaniel).

The MRCCR is a friendly self-confident and inquisitive breed that can be reserved with strangers. It has a slightly different coat from the recognized Curly in that the curls aren’t as tight. The dog is also not as as large,the ears are longer, and the only color in which it comes is liver. Within the breed, there are two individual types mostly rooted in leg length. Regardless of type, the Murray isn’t a dog that one leaves in the backyard and forgets (what breed is?).

Not recognized by any major kennel club, breed affectionados are quick to point out that theirs is not a designer dog. It is significantly different enough that hunters and fanciers feel it should be recognized as a separate breed.