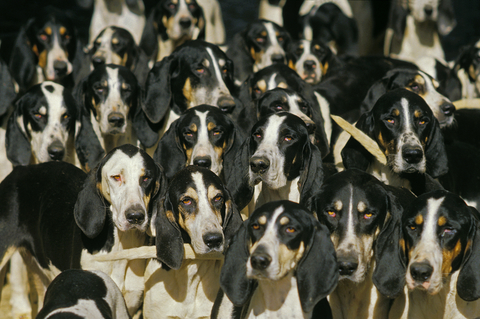 Over the centuries, most countries developed their own hound breeds, but the French were so good at it that not only do experts say that France produced more hounds than any other country, but that the country was the original home of the hound. That last bit is a big statement when one considers hounds emanating from Africa, but we can’t dispute that in Europe, French hounds ruled.

Dr. Emile Guillet, Master of the Hounds of the Rallye Kereol, wrote in an introduction to Johnston and Ericson’s Hounds of France: “With six or seven hundred thousand hounds, divided into 40 breeds or varieties used by 400,000 hunters, France possesses a national heritage unique in the world.” Writer, David Hancock, also points out that there are nearly thirty breeds of French scenthound, and nearly all of them are little known outside the country.

Hounds, of course, are synonymous with hunting, and in France, the heritage of venery remains alive. One source writes that with 1,141,000 participants, hunting is the third most popular leisure activity for the French. The country has 8 million dogs, and according to the Federation Nationale Des Chasseurs (France’s National Federation of Hunters), half are hunting dogs. Traditionally, hunting is divided into two types based on quarry: La grande and la petite venerie. La Grande quarry is, as the name implies, large game: Stag, roebuck and boar.

The French excelled in particular at cultivating scenthounds, from those in the ‘basset’ family to running dogs, but there was one more category of hound that they referred to as Chien d’Order, or “Order Dogs.” These were (and are) big hounds that knew how to behave in a pack which could easily have over 50 hounds in it. These dogs must have a good nose, speed, stamina, and courage. Order breeds are typically the Poitevin, the Billy, the French white and black, and the Great Blue of Gascony, but another sources adds the French tricolor, the French white and orange, the English Foxhound and American Foxhound, the Great Anglo-French tricolor, the Great Anglo French White and Black, and the Great Anglo-French white and orange to the mix.

The style of hunting in the Grande Vènerie, or with Chiend’Order, is called chasse-à-courre. The dogs (followed by hunters on horseback) hunt by scent and follow the prey until it literally drops dead. Although the 17th century grandeur of a chasse-à-courre  hunt didn’t survive the 18th century, many thousands of French men and women follow the present spectacle of the chasse-à-courre to this day.

There are groups devoted to Order Dogs such as the Order Club (associated with the Société Centrale Canine) and the Facebook page, Club Français du Chien d’Ordre (be sure to check out the videos on that page).

Image: A pack of French Black and White Hounds/Dreamstime Photo. The breed was recognized by the FCI in 1957, though as of 2009, it recorded no more than 2,000 of the dogs in existence.