If you weren’t at the Westminster Kennel Club Dog Show, or perhaps you missed the broadcast, you also missed the interview that we share below.  In our view, it is “must see” TV for revealing what breeders like Kent Boyles do, and he’s not the only breeder giving back. Check it out:

Rumor is far from being unique.

The 15-inch Beagle named Ch. K-Run’s Park Me In First, better known as “Uno,” became a certified therapy dog who visited veterans. So did “Josh,” the Best in Show Newfoundland.

Not every dog goes on to win Best in Show, but there are plenty of Westminster competitors who have “day jobs:” Lacey, a Labrador Retriever who was entered in Westminster’s agility competition puts in 50-hour weeks comforting patients at her owner’s child and adolescent psychiatry practice in California. “Tabitha,” a Doberman Pinscher, was initially a show dog for retired New York Police Department officer John Marinos, who had handled other dogs at Westminster. Then an acquaintance suggested Tabitha try out as a bomb-sniffing K9.  The picture below shows how that idea went over: 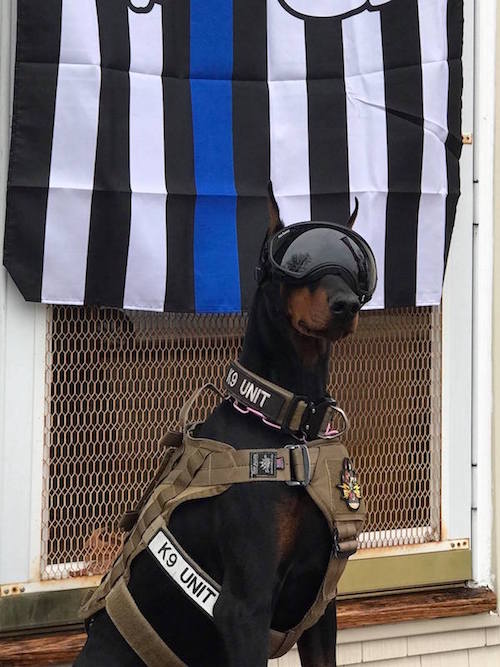 Golden Retriever, Rainier, is one of the country’s top 20 show Goldens, and some of his siblings do therapy and search-and-rescue work, while another is training to become a therapy dog for 911 dispatchers.

The list of show dogs who wear other hats goes on and on, but these dogs weren’t found in a cabbage patch. They were bred by people who health tested the parents, carefully socialized the puppies, vetted potential owners, and very often give back by actively engaging in worthwhile programs. Adopt-don’t-shop proponents are fond of saying that there is no such thing as a responsible breeder. They haven’t met Kent Boyles, and the many breeders like him.

4 thoughts on “Heritage Breeders: What You Don’t Hear About”