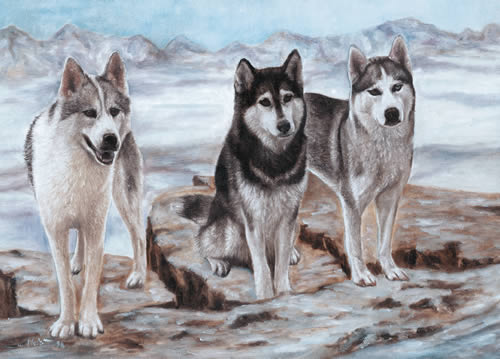 If you’re a Siberian Husky owner, it might interest you to know that the addition of the word, “husky” to the breed’s name wasn’t seen in print until 1929, just before the breed was recognized by the AKC. In fact, before that time, the breed was known as the Siberian Dog or Arctic Husky, but more interestingly, the Chukchi Dog (named after the ancient Paleo-Siberian people who live in Russia’s extreme northeastern section of Siberia). Why interesting? Because one theory holds that “husky” came from the mispronunciation of ‘Chukchi.’

The Siberian is one of the most undiluted of all the northern breeds, and it’s possible that the breed was bred pure for some 3,000 years. Having a Siberian Husky in a tribe could mean the difference between life and death for families, so the Chukchi were highly selective of the dogs that they allowed to reproduce and castrated all but the best lead dogs. Women cared for the dogs, so temperament was important since the dogs were essentially reared with the children. Ultimately, the Chukchi developed an incredible dog.