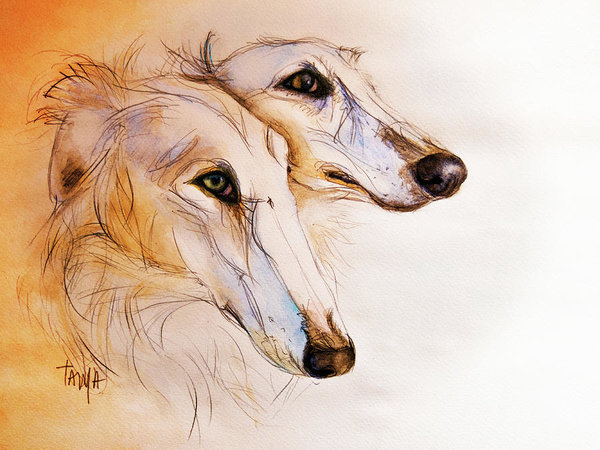 Katana Zero is a 2D action platform video game, and one of the game’s achievements comes after collecting the blue keycard during the Quiet Hills segment of the Studio 51 mission, and attacking a Coffin Head animatronic robot.

Our post, however, points out that the rather ghoulish term, “coffin head” refers to the long, narrowish head that,  yes, resembles a coffin shape, and is found in a breed like the Borzoi. The term is attributed to Harding Cox

In our view, the Borzoi not only has one of the most exquisite headpieces in dogdom, but offers a classic illustration of “form follows function.”  A Borzoi has an impressively wide field of vision so important to a sighthound. Eyes situated frontally gives the dog a 270-degree field of sight (as compared to our own 180 degrees), and there is a line of vision cells across the retina known as a visual streak, something unique to sighthounds, retrievers, and many hunting breeds. It’s what helps a dog like the Borzoi spot prey from a distance.

Borzoi pups aren’t born with that gorgeous head fully developed into its characteristic “coffin shape,” it takes time – some three years, according to one source. Puppies actually start out with a relatively short nose, but by the time the pup is five or six weeks old, the nose begins to straighten. Over the next few years, the head (a type known as dolichocephalic) can grow an impressive ten more inches!

In the breed’s AKC study guide for judges, it’s pointed out that the Borzoi is a “catch and hold” dog who historically “bit for a living.”  The breed’s classic prey, the Russian wolf, was a heavy and strong creature, and it took strong jaws (as well as a deep under jaw) to hold this animal. Deep jaws offer a better foundation for teeth needed to “catch and hold.”  This is reflected in the Borzoi having the only hound standard specifying full dentition by indicating that “missing teeth shall be penalized.”

Morbid descriptive term aside, this breed’s head is so emblematic of the breed that the study guide adds, “Even the worst Borzoi head is not going to be mistaken for another breed.”