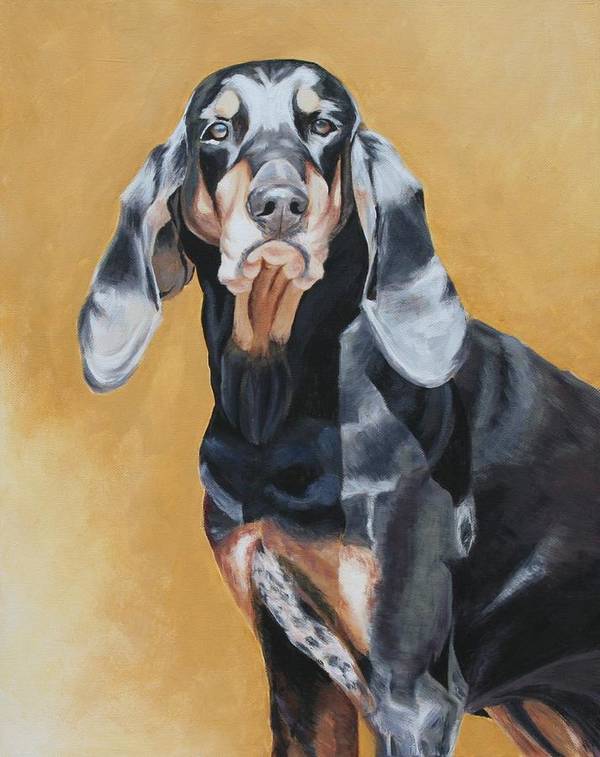 We offer a post sponsored by the phrase, “So what.”  What follows could qualify as minutiae useful only in a game of canine Jeopardy where correct question is, “Where do you find the word, “cold” in AKC breed standards?”

It all started when we came across a reference to the Black and Tan Coonhound‘s coloring found in a canine encyclopedia: “Cold black with rich tan markings above the eyes, on the sides of the muzzle, chest, legs and breeching with pencil marking on toes.”

Cold black?  Is that even a thing?

Artists know immediately that the answer is, “yes,” but the color goes by a different name when the pigment comes out of a tube of paint.  In fact, an artist has many blacks from which to choose, and they include Mars Black, Lamp Black, Ivory Black, and Carbon Black.  Add the Hex, RGB, and CMYK codes for black shades, and we get at least 134 shades of black.

The AKC doesn’t offer nearly as many options for black, and as far as we can tell, in that world, black is black. We did come across “black gold,” in the Shih Tzu standard, but we certainly didn’t find “cold black.” That said, we’ll stand corrected if someone can prove otherwise.

It may be of passing (if not useless) information to know that only one breed standard mentions the word, “cold” in a way that doesn’t have to do with water or temperature. It happens to be a hound,  and it happens to be the Redbone Coonhound: “General Appearance: Hunted from swamplands to mountains, the Redbone is surefooted and swift, even on the most difficult terrain. Well-balance”d, with a flashy red coat and excellent cold nose, the powerfully built Redbone mingles handsome looks with a confident air and fine hunting talents.

“Cold” does not appear in the breed standard of any herding, terrier, toy, non sporting, or miscellaneous breed. Not one.

Things pick up when we look at the working group:

We hit the proverbial mother lode with the Sporting Group where five breeds include the word:

We wanted to make sure we didn’t miss something about the “cold black” color, and used a couple of search engines using “cold black breeds” as the keywords in our search. Instead, we found this: “According to some shelters and breeders, with dogs of the same breed or litter that come in black and other colors, such as poodles, the black-coated dogs tend to be friendlier.”

We found nothing, nada, zilch to support this statement. Nor did we find anything about “cold black” as a color. This isn’t to say that “cold black” has never been used colloquially by fanciers. As we thought about it, a memory was triggered.  We could recall many breeders and fanciers from several breeds using the term, “gunmetal black” to describe the shade of a black dog’s color.

In jewelry making, gunmetal jewelry is made through a process known as “plating” in which a piece is cast in brass,  then it is layered with a mix of copper, tin, and zinc to get the dark color for which it is known – a color called gunmetal.  This has been described as a “stoic, steely gray” black that indeed, some might describe as a “cold” black.

Technically speaking, the intensity of a color, its shades and tints, comes down to hues, saturation numbers. Anyone who has ever shopped for white house paint (or even black) quickly learns that there is no such thing as “plain white paint.”  As we see it, the AKC might be forgiven for not “going there.”

In closing, and as an aside, we found an Illustrated Guide to the Black and Tan Coonhound;  there is more discussion on the different shades of tan in the markings than there is on the shades of black. Black is black.

Image: Coonhound 1 by Wendy Whiteside is available as fine art and in home decor and lifestyle items here

Did you know that in the Tarot card world, the Seven of spades refers to the mental and positive mental habits of a natural winner?Toy breed owners, remember a beloved dog, or surprise a breeder, junior handler, or one of your puppy people with a poker sized playing card with their dog's photo and name on it! The holidays are coming!We have ONE and only one card left, and it's the seven of spades available for $50. First come first served. As soon as you contact us, we will send you a Paypal invoice. Upon receipt of payment, we'll need a photo of the dog along with text ((no longer than 66 characters including spaces). If the submitted photo was taken by a professional, we need a signed copyright release form from the photographer. See sample of the completed cards here: nationalpurebreddogday.com/shop/playing-cards/original-playing-cards/
... See MoreSee Less