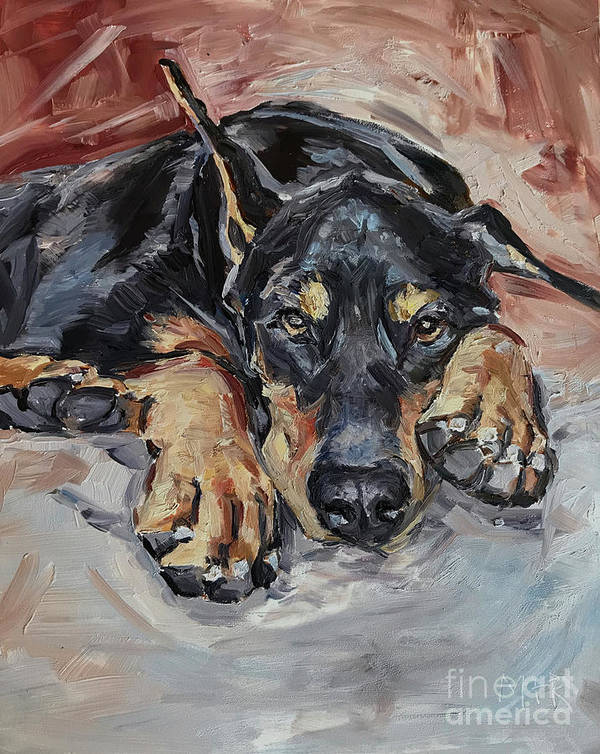 Perhaps it is because she owns the ground over which she stands with authority that makes the average person off the street regard the Doberman Pinscher as a large breed.

In fact, this is a medium sized dog. The breed standard stipulates that a dog even an inch over the maximum height is considered large-sized, not medium, and thus is not of correct breed type. The Doberman’s “medium-ness” gives him more endurance and agility than many breeds that are larger.  While the illustrated guide suggests that that undersized Dobermans aren’t very common, some males seem smaller, if not feminine, even though they are the ideal height because they lack bone and substance. That leads us to the next wrong assumption often made by the public, and that has to done with bone.

A person less knowledgable about the breed might guess that because the breed is elegant, sleek and athletic, it is a medium boned dog. Yes, there must be a balance of bone density, substance and size in relation to the dog’s height, but the standard calls for the dog to be heavy boned in the forelegs. Heavy boned forelegs imply heavy bones through the dog’s structure without being coarse, and such forelegs can accept a proper transfer of power coming from the hindquarters.

Novices to the dog show world wanting to learn more are often advised to visit the Doberman Pinscher ring because structural soundness is fundamental to the Doberman’s breed type; the breed must be so perfectly balanced that it is usually apparent when something is “out of whack.” When individual parts are noticeable, the dog takes on the appearance of a Mr. Potato Dog, and not a well put together Doberman in which everything seems to “fit,” all parts in proportion to each other. These are the dogs to which we are visually drawn.

Image: Doberman Pinscher by Maria Reichert is available as fine art, and as lifestyle and home decor items here