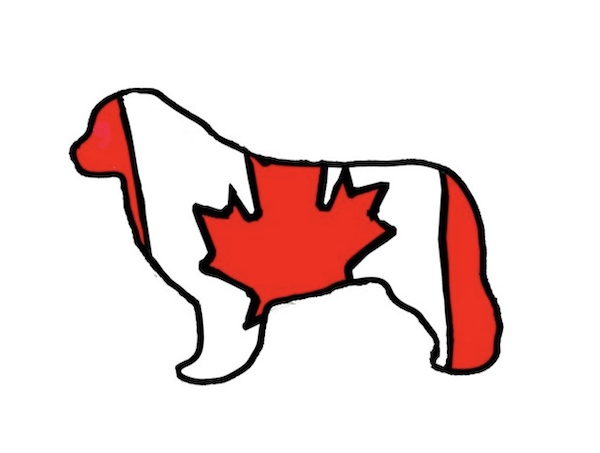 Today is Canada Day, a holiday that commemorates the anniversary of the Act that consolidated three territories into the single nation of Canada back in 1867. We wish our friends to the north a happy holiday!

Canada is the second largest country in the world (after Russia), and there is no “state” dog, per se. Some of the world’s most beloved breeds are, however, uniquely Canadian: The Labrador Retriever, the Newfoundland, the Landseer, and the Nova Scotia Duck Tolling Retriever.

A few are breeds with which some readers may be unfamiliar and this post touches upon them
The Salish Woolly Dog was an important part of Coast Salish life because the dogs’ hair was used to weave clothing and blankets, sometimes in conjunction with goat hair. Some cynologists believe it was the only primitive North American dog to be intentionally developed through well-planned animal husbandry.  When naval officeer, Captain George Vancouver, saw these dogs during his visit to Puget Sound in 1792, he thought they looked like large Pomeranians. The same year, Spanish naval officers, Cayetano Valdés y Flores and Dionisio Alacalá Galiano, also visited the Pacific Northwest and noted that the dogs didn’t bark, but “simply [had] a miserable howl.”
By 1558. the Salish Woolly Dog was considered extinct, but we found sources indicating that the last known specimen actually died in 1940.
Also considered extinct is the Tahltan Bear Dog (pronounced tall-tan).  While its name suggests that it was a dog limited to the Tahltan Nation in the interior of British Columbia, the dog was common among other First Nations in the region including the Tlingit, Tagish, Kaska and Sekani tribes. The breed likely got its name because the Tahltan people referred to it as “our dog,” but it was widely traded which unfortunately resulted in the Tahltan becoming increasingly crossbred.  In 1969, one could still find the odd dog in Telegraph Creek, Atlin, Whitehorse and Keno in Yukon, but the last registration of a Tahltan Bear Dog with the Canadian Kennel Club was in 1953. Between illness, neglect, the introduction of firearms (minimizing the use of the dog to hunt bear), the breed went extinct sometime in the 1970s or 80s.
The Canadian Inuit Dog is not extinct, but neither it is robust in numbers. As of 2018, there are approximately 300 such dogs were registered with the Canadian Kennel Club (which refers to the breed as the “Canadian Eskimo Dog”) From the Canadian Kennel Club’s website: The Government of Nunavut calls the Canadian Eskimo Dog the Canadian Inuit Dog and made the breed the territory’s official animal.  In Inuktitut the dog is called Qimmiq and some people in the fancy call it that too, as, while used historically, the word Eskimo is considered offensive.
For thousands of years,  these dogs were used by the Inuit and their ancestors to pull sleds, find seal holes, and keep predators at bay, but a controversial part of the breed history centers round the alleged death of thousands of the dogs at the hands of officials who (it is charged) deemed it easier to shoot the dogs instead of enforcing ordinances. After visiting communities and gathering testimony, the Qikiqtani Truth Commission revealed in 2010 that it found no evidence of a conspiracy to shoot dogs. NPDD doesn’t feel it has done enough research to support or dispute the account at this time,  but what isn’t debated is that though rare, the Canadian Inuit Dog is recognized as an icon in Canadian culture. A revitalization program is on-going to help re-establish the breed in the county.
Other breeds associated with Canada but that may not recognized officially include the Seppala Siberian Sleddog and the Hare Indian Dog.
Image: Sticker available at Cafe Press