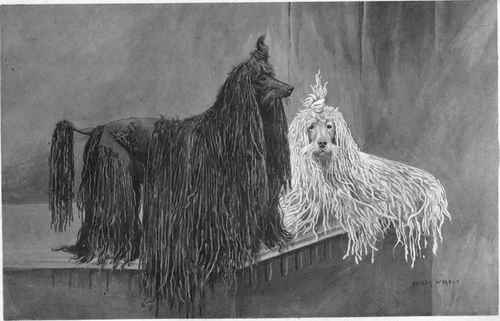 Part II on corded coats in the Poodle.

Corded Poodles are hardly new. They were popularized in England and on the Continent around 1850, and in some circles, corded Poodles seemed to have also been referred to as “Russian Poodles.” The first Poodle to be crowned champion in England was a corded dog named “Achilles” in 1890. He was a legend in his time and was described as standing 23 inches at the shoulder with cords that hung down for 30 inches.

The Poodle Club of England was formed in 1876, and a bit of a tussle ensued between “curly Poodle” fanciers and the corded fanciers because both were exhibited in the same classes. The debate culminated in 1910 with the division of Corded and Non-Corded classes.

Some corded Poodles were imported to the United States in the 1890s to be shown, but it didn’t really catch on at the time.

We always defer to the breed experts, but interest in the corded coat may have resurged with Joe Genarella who wrote the book, “Cording the Poodle for the Show Ring.”

Images: Two corded Poodles by Arthur Wardle; “Tell,” a corded Poodle from 1897; the corded Poodle, “Cannon Hill Beauty” exhibited at the end of the 19th century; A German Corded-Coated Poodle, at the Berlin International Dog Show as seen in an illustration for The Illustrated London News, 7 August 1880.