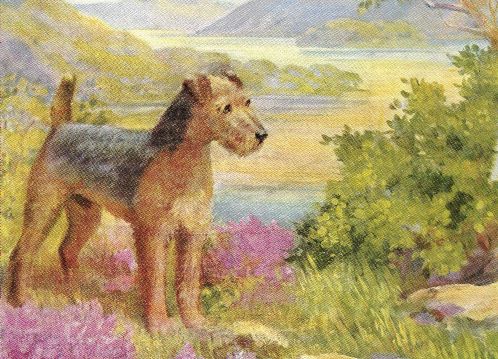 There probably isn’t a dog owner in the world who hasn’t referred to their puppy or dog as “jaws” at one time or another. Doesn’t it seem as though some dogs are a simple set of prodigious choppers with a tail attached?

But that’s exactly what farmers in Northern England’s Lake District wanted in their dogs. Foxes that munched on sheep during lambing season or plucked off chickens were bad for business, and certainly bad for the woolies and featheries who suffered greatly. Crops also suffered from badgers and foxes, in particular, the Westmoreland Fox, and in that light, it was understandable that farmers didn’t just want the foxes discouraged, they wanted them gone. There was no better dog for the job than the Lakeland Terrier.

Not for nothing does the Lakeland Terrier’s AKC breed standard read: “jaws are powerful.” This breed was bred expressly to exterminate critters bigger than a rat, and unlike some other terrier breeds that simply bolted the quarry, the Lakeland was expected to dispatch the fox in its own lair.

Interestingly, this was not the expectation for Lakelands living in the southern part of the country. There, Lakies were expected to hold prey unmolested so that it could live another day (and for another hunt). It was thought that this was why Lakelands in that part of England had more finely chiseled muzzles, they didn’t need the jaw strength of their northern counterparts.  The standard, however, acknowledges the role of “vermin”assassin” in the breed’s development by emphasizing head proportions as critical to correct type; indeed, a short, wedge shaped head that typically ends in a snipey muzzle is to be penalized, a construction, we suppose, that was possessed by those southern Lakeland Terriers.  Such a muzzle would be no match for badgers that really were vicious teeth with a tail attached. Far better to meet the opposition with a well-balanced, rectangular head in which the length of skull equaled the length of the muzzle. There is strength in that head, and it gives this breed a muzzle with crushing ability.

2 thoughts on “Cue the Theme to Jaws”